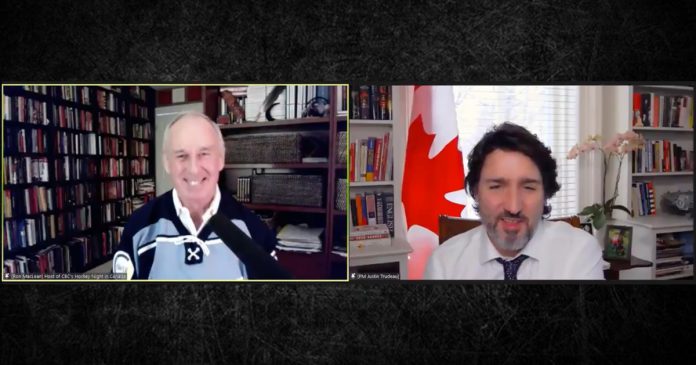 During the event, Trudeau gave an opening statement and condemned the issue of discrimination within the sport.

“Hockey brings Canadians together and there’s no place for racism or discrimination of any kind in Canada’s game,” said Trudeau during his opening statement.

“We need everyone, educators, coaches, parents, students and allies to play an active role to ensure that our game and our country are more inclusive.”

The event, titled “Social Justice & Racism Lessons From Willie O’Ree: A Conversation with Canadians”, was moderated by Ron MacLean and was organized in response to a recent documentary on the legendary black hockey player.

“You gave the most beautiful homage to [Pierre Trudeau], and what really strikes me is that’s 2000 and within eight years you’re a Member of Parliament and within a decade and a half you are the prime minister of this country. So you are cut from the same cloth,” said MacLean in his introduction to Trudeau.

Recently, it was also revealed that MacLean took part in a Liberal Party fundraiser in December which cost $400 per person for tickets. The fundraiser was titled “A Conversation on Sport and Politics in Canada” and it was first announced by Liberal MP Adam van Koeverden.

In 2019, MacLean’s Sportsnet co-host Don Cherry was fired from his long-time position at Coach’s Corner over allegedly racist remarks.

Cherry was terminated from the show on Remembrance Day after he called out people who do not wear poppies to honour Canadian men and women who served in the military.

Cherry has since stood by his statement and has said that his words were taken out of context and misrepresented.

Following Cherry’s departure, MacLean publicly apologized for his former co-hosts remarks and then went on to lecture Canadians on “white privilege” and systemic racism during a Hockey Night in Canada broadcast.