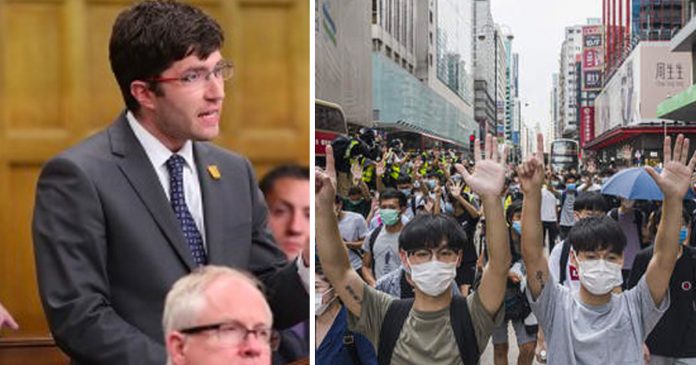 Following the United Kingdom’s decision to open a special visa program for Hong Kong residents hoping to become British citizens, a Conservative MP is calling on the federal government to expedite a path for political refugees here in Canada, and telling China not to stand in the way.

Conservative MP and international development critic Garnett Genuis told True North that China has no right to dictate who gets accepted into Canada.

“Conservatives are very concerned about the situation in Hong Kong. We have called on the Liberal government to put in place a clear, expedited path for pro-democracy protesters and political refugees fleeing Hong Kong for Canada and to make it clear that only the Canadian government will determine who does and does not get admitted to this country,” Genuis said.

Hong Kong residents currently holding Canadian passports have been given an ultimatum by China to decide between their Chinese or Canadian citizenships.

So far the Liberals have only implemented some immigration measures to support Canadiasn residing in the country and Hong Kongers hoping to come to Canada.

The program includes new pathways for students and graduates who want to work in Canada. Another measure also includes expedited document processing for Canadians and permanent residents in Hong Kong.

Genuis thinks the Canadian government can do more.

“Conservatives are also calling on the Liberal government to impose Magnitsky sanctions against those responsible for imposing a draconian national security law in violation of the Sino-British Joint Declaration, an international treaty,” Genuis said.

Last year, Conservative Party leader Erin O’Toole called for the Chinese ambassador to Canada to be recalled from his post after threatening the approximately 300,000 Canadians currently living in Hong Kong.

The ambassador has yet to apologize for the statement.