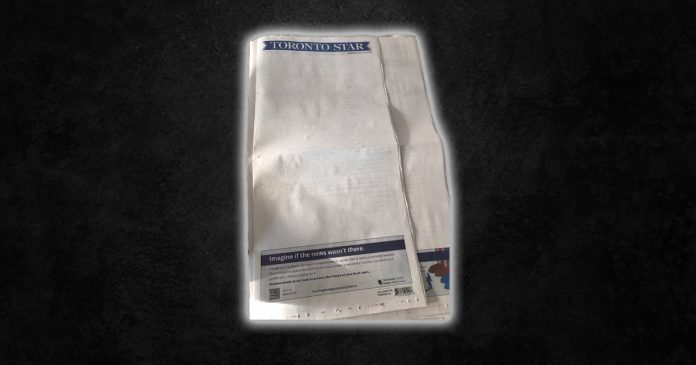 The “Disappearing Headlines” campaign featured a number of outlets including the Toronto Star, the Waterloo Region Record, the National Post and a number of other local and national publications.

As part of the concerted effort each publication issued a print edition with a blank cover page featuring a disclaimer by the advocacy group News Media Canada asking Canadians to “imagine if the news wasn’t there.”

“Google and Facebook use their monopoly power to pocket 80% of online advertising revenues. These corporate giants benefit from the news content produced by Canadian journalists and publishers – without paying for it,” reads the disclaimer.

“Ottawa needs to act now to protect the future of your local news.”

News Media Canada was formed in 2016 and it counts hundreds of Canadian mainstream media publications as members.

The group has also pushed for the Canadian government to introduce copyright laws which would prevent other outlets from reporting on and aggregating news coverage.

According to News Media Canada’s official website, over 100 newspapers ran the blank front pages this morning urging Ottawa to “adopt legislation that allows newspapers to negotiate a fair price for use of their content, with massive fines if Google and Facebook refuse to co-operate.”

True North reached out to News Media Canada for comment but did not hear back at the time of publication.

The federal government is in the process of finalizing legislation that would regulate Canadian news content on social media websites such as Facebook.

In November, the Liberals introduced Bill C-10, also known as the “An Act to Modernize the Broadcasting Act.”

Critics have argued that Bill C-10 has opened the door for state regulation of the internet.