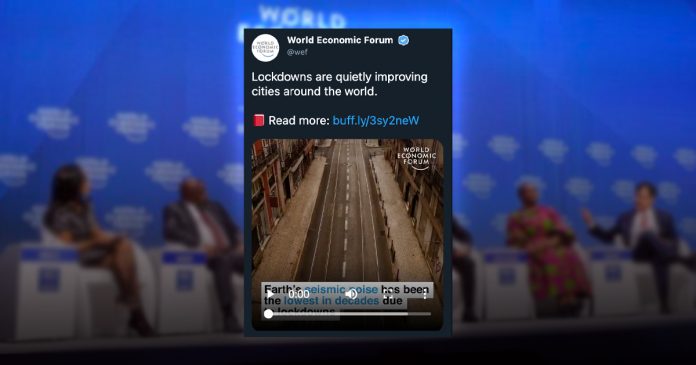 The World Economic Forum (WEF) has backtracked after it claimed that lockdowns were improving cities.

On Feb. 26, the World Economic Forum put out a video on Twitter with the caption: “lockdowns are quietly improving cities around the world.”

The video showed images of empty streets and idle businesses and claimed that lockdowns led to a drop in carbon emissions and improved air quality.

The WEF featured seismologists who claimed that monitoring seismic activity underground became much easier during lockdowns as there was less noise from human activity to interfere with their studies.

The WEF faced backlash from many users, with many pointing out that the negative effects of lockdowns are more significant than the studies of seismologists.

On Saturday, the WEF admitted that lockdowns did not improve cities but stated they were an “important part of the public health response to COVID-19.”

In Canada, months of lockdowns have led to dramatic spikes in substance abuse and mental illness. Most parts of Canada reported record levels of opioid overdoses since the beginning of the pandemic.

The WEF has been heavily scrutinized ever since the group began promoting the idea of the “Great Reset,” an attempt by governments, corporations and multilateral organizations to restructure society and the economy.