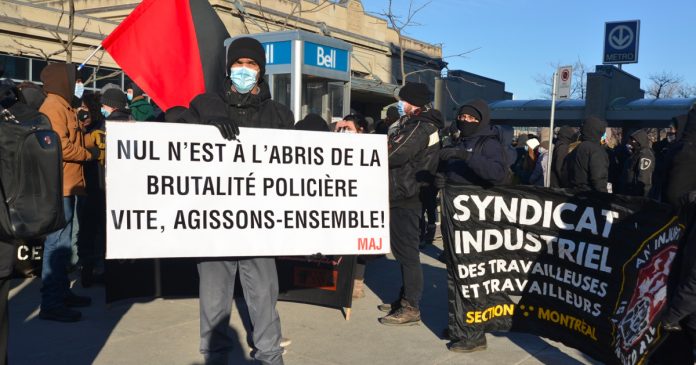 Over one hundred anarchist and Antifa-affiliated groups marched in Montreal’s Metro Parc on Monday calling for an end to the police.

The march was organized by the group Collective Opposed to Police Brutality (COBP), who allege that abolition of the police is the only effective way to combat police violence.

“COBP reiterates that this solution, which may seem radical if we stop at this slogan alone, is the only possible solution to curb the systemic violence of the state against vulnerable or marginalized people,” wrote the group in  a press release following the march.

COBP’s website claims the group has been operating since 1995 and this year’s march was the 25th annual rendition of the event.

According to media reports immediately following the protest, police were unable to verify whether they had laid any charges or made arrests at the event.

As reported on by True North, the anarchist-affiliated COBP took part in a similar masked march through downtown Montreal last year on March 15th.

As a result of the protest, two people were arrested on scene for uttering threats and causing mischief.

To advertise the event, COBP posters were shared on far-left platforms like Montreal Counter-Information.

As exclusively reported on by True North, Montreal Counter-Information has been responsible for publishing guides during the national rail blockade crisis on how to create Molotov cocktails and other means of sabotaging national infrastructure.

“Anti-authority violence is defined as the opposition to, or rejection of, the authority of the State which leads to anti-Government and violence against law enforcement,” wrote CSIS.