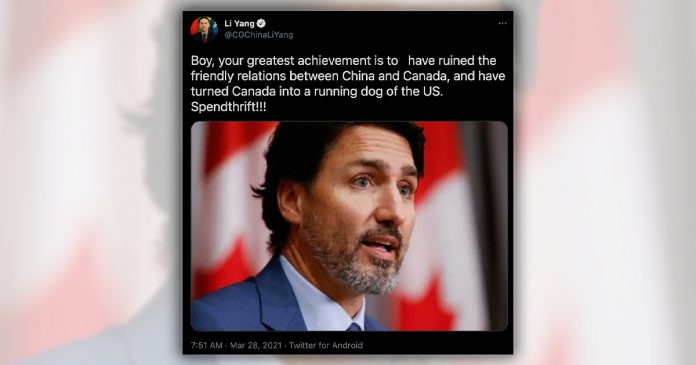 China’s consulate general in Rio de Janeiro, Brazil referred to Prime Minister Justin Trudeau as a “running dog” for the United States and accused him of ruining relations between Canada and China.

Consul-general Li Yang published the tweet on Sunday morning. Since the publication of this article, the tweet has received over 1,400 likes and has been retweeted nearly 300 times.

“Boy, your greatest achievement is to have ruined the friendly relations between China and Canada, and have turned Canada into a running dog of the US. Spendthrift!!!” tweeted Li.

Since the arrest of Chinese heiress and Huawei CFO Meng Wanzhou by Canadian authorities in 2018, China has ramped up its hostile rhetoric against Canada and other allied nations.

Canadian diplomats have recently demanded consular and legal access to the secret trials of the two Canadians detained by China in retaliation for Meng’s arrest, Michael Spavor and Michael Kovrig.

Both men have been held in Chinese prisons for over two years and are now being tried for trumped up espionage charges.

Alongside several nations including the US, Canada has raised several sanctions against China for its involvement in the ongoing genocide of the country’s Uyghur Muslim minority. In response, China announced its own sanctions targeting Conservative Party MP Michael Chong and other members of the House of Commons human rights committee.

On February 22, parliamentarians from all parties voted to declare the situation a genocide, withstanding Trudeau and his entire Liberal cabinet who abstained from voting on the matter.