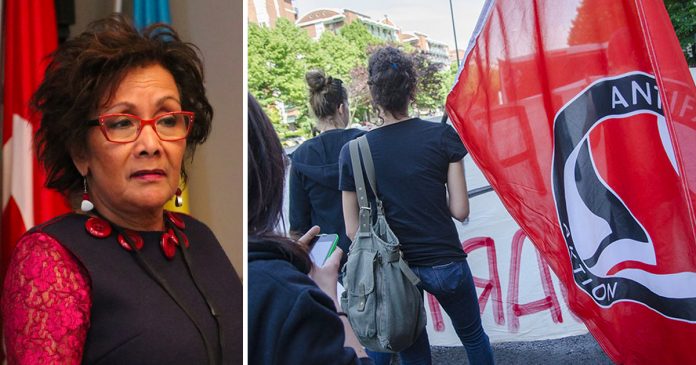 Fry made the comments in support of an amendment by Conservative MP Michael Chong to a motion on a study into human rights abuses by extremists against minorities, the LGBT community and others.

Chong’s amendment sought to change the wording of the motion from exclusively referencing “right-wing extremists” to simply “extremists,” following the advice of the Canadian Security Intelligence Service (CSIS) in its 2019 public report.

“There’s one part of the motion that I think should be amended, and I move an amendment to the motion that we remove the two words ‘right wing’ so that it would simply read ‘abuses by extremists,’ and so on and so forth,” said Chong.

“The reason I’m proposing that amendment is twofold. First, extremism can come from both the extreme right and the extreme left … More importantly, I think we should follow the advice of CSIS, which has actually eschewed using the terms ‘right-wing extremism’ and ‘left-wing extremism.’”

In response, Fry insisted that she agreed with Chong’s amendment and referred to Antifa as an example of a left-wing extremist organization.

“I actually agree with Mr. Chong’s amendment. I think if you want to do a good job on a study, you want to walk away from being too subjective or using too many adjectives to describe what your ideology is about,” said Fry.

“I think the word ‘extremism’ … When you look at Belarus, Russia, China, Venezuela and at non-governmental organizations like Antifa, etc., we have left-wing extremists and we have right-wing extremists. I have heard the argument CSIS made. It’s a good argument, so let’s take away this florid language and just talk about extremism in whatever form it takes. As a mover of the motion, I’m happy to support Michael’s amendment.”

According to CSIS’ report, “anarchist violence” is cited as an example of ideologically motivated violent extremism alongside ethno-nationalist violence, the incel movement and anti-LGBTQ violence.

As recently reported, anarchist and Antifa groups were involved in anti-authority protests in Montreal which recently erupted in violence and clashes with police.

While Antifa is a decentralized network of anarchists and other far-left sympathizers a network of websites in Canada frequently distributes communications and guides highlighting anarchist violence.

Among this network are platforms such as Contrepoints which describes itself as a “revolutionary” platform. As exclusively reported by True North, the website recently published domestic terror instructions including detailed information on how to sabotage railways and create the highly flammable industrial material thermite.