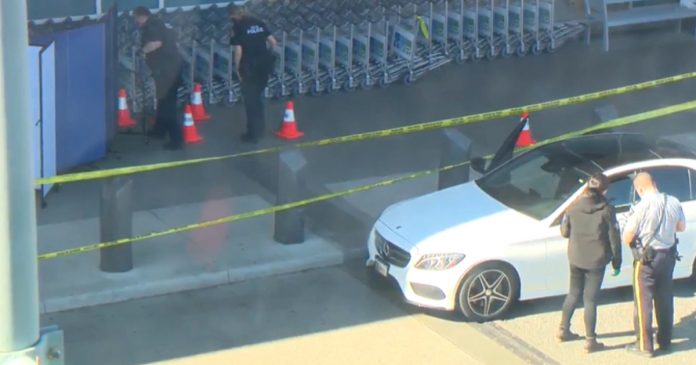 Police say the murder of a 28-year-old man at the Vancouver International Airport on Sunday was the city’s latest instance of gang violence.

Richmond Police responded to the shooting at around 3:00PM outside the departures area of the airport. Several gunmen reportedly opened fire in the crowded area.

The deceased has been identified as Karman Singh Grewal, a longtime member of Vancouver’s United Nations gang. The suspects are also believed to be associated with the ongoing Lower Mainland gang conflict.

Richmond Police intercepted the getaway vehicle but were shot at by the suspects before they escaped. No officers were injured.

Police later found a burnt-out vehicle on the 9700-block of Princess Drive which is suspected to be the getaway car.

The suspects have not been identified and remain at large.

Speaking to the media on Sunday, Chief Superintendent Will Ng said the attack “was targeted and carried out in broad daylight, with absolutely no regard for public safety.”

Ng warns that gang violence in Vancouver is becoming more brazen, noting that a large number of bystanders were put at risks by the shooters.

“This generation of gangsters is taking things to another level,” he said.

“They will stop at nothing to target rivals, even if it’s at an international airport in broad daylight on Mother’s Day, and putting everyone at risk, including shooting at a police officer, which indicates to me these people have no care whatsoever,” Ng said.

Metro Vancouver has seen a series of deadly shootings recently. In the past month, two other known gangers have been murdered in public places, both in the Langley area.

Earlier in the month, corrections officer Bikramdeep Randhawa was fatally shot in the parking lot of North Delta’s Scottsdale Mall. No arrests have been made in connection to the murder.