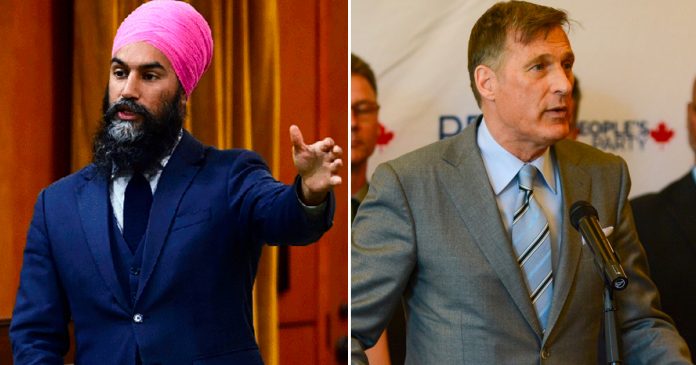 “There is nothing new in attempts by the authoritarian far-left to deplatform and cancel people with whom they disagree. What’s new now is that there seems to be a concerted effort to silence opposition to lockdowns using the same old trick of calling people racist and white supremacists,” Bernier told True North.

“Singh, Nenshi and other politicians and commentators are all of a sudden claiming that tens of thousands of ordinary Canadians who demonstrate against ineffective and disastrous lockdown policies are dangerous extremists. This is despicable.”

Bernier has been a regular staple at anti-lockdown rallies across Canada. Most recently, the PPC leader travelled to Saskatchewan to attend a freedom rally in Regina where he and others were ticketed $2,800 for violating COVID-19 public health orders, according to the Western Standard.

The ticket is the second the PPC leader has received, having been charged for similar violations in Peterborough, Ontario earlier this year.

As a former MP and minister, Bernier was also an early member of the Anti-Lockdown Caucus, which has grown to include several dozen former and current elected officials who are opposed to government COVID-19 measures.

On Monday, Singh told reporters that there was “certainly” a connection between anti-lockdown protests and far-right extremism.

“To brazenly not follow public health guidelines puts people at risk and that is something that we’ve seen with extreme right-wing ideology,” said Singh.

According to Bernier, Canadians should be more concerned about Singh’s alleged connections to extremism.

“Singh himself has well-documented links to Khalistani terrorist sympathizers. He also tweeted a glowing message of admiration for communist tyrant and mass murderer Fidel Castro when he died. Singh has more connections to dangerous extremists than anyone in the anti-lockdowns movement. He’s a threat to Canadian democracy, not those who want their normal lives back,” Bernier told True North.

Currently, the PPC leader is facing accusations of racism after court documents allege that Bernier made racial comments towards Singh in 2018.

The allegations are part of an ongoing defamation lawsuit by Bernier against political strategist Warren Kinsella, who Bernier claims was hired by the Conservative Party of Canada to smear him and his party as racists. Bernier has since denied the allegation.