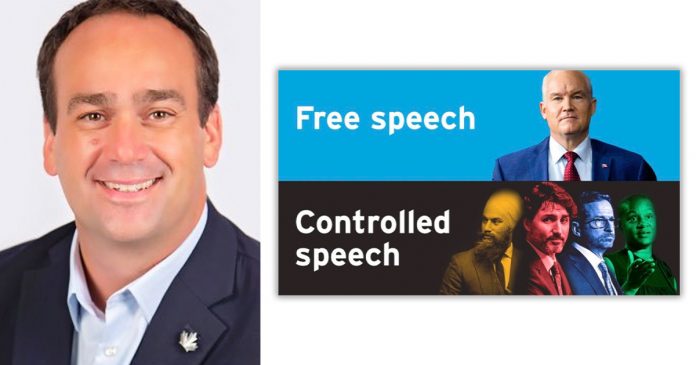 Liberal MP Mark Gerretsen was in for an unpleasant surprise on Wednesday after he asked his followers on Twitter to judge whether his party was conspiring to strip Canadians of their freedom of speech or whether the Conservatives were fabricating the threat of the Liberals’ internet regulation bill, C-10.

Garretsen made the comment in response to a tweet by Conservative Party Leader Erin O’Toole which implied that the Liberals, NDP, Bloc Québécois and the Green Party were for “controlled speech” while the Conservatives supported free speech.

The tweet quickly spread on social media as Canadians chimed in to tell Garretsen that they believe the Liberal government was trying to strip the free speech rights of Canadians.

“Option 1. When the former head of the CRTC and esteemed professors in the field are saying it is an attack on free speech, I’ll believe them over politicians with an agenda,” tweeted Twitter user Tammy.

“I will side with the experts who are not on the [Liberal Party] payroll and choose option 1,” tweeted Fred Kirkey.

Over the weekend, Bloc Québécois Leader Yves-François Blanchet told the CBC French-language program Tout le monde en parle that his party would support Bill C-10 and will be requesting for the Liberal government to fast track the bill before the legislative session ends this summer.

Critics of Bill C-10 have claimed that the legislation is deeply flawed and would harm Canadians’ right to freedom of expression.

Both von Finckenstein and Denton signed a petition earlier this week comparing the bill to steps taken by “authoritarian” regimes to clamp down on freedoms.