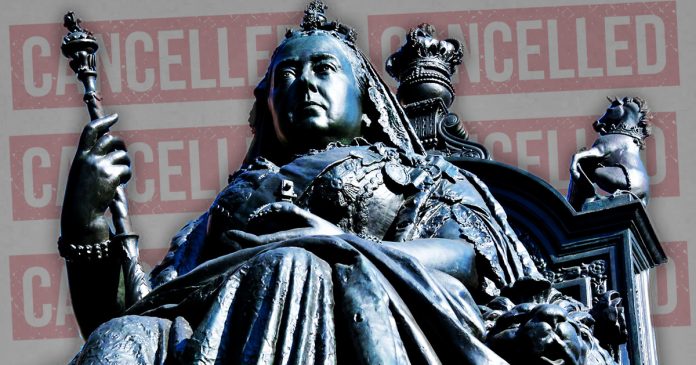 I hope readers of this column enjoy the upcoming Victoria Day long weekend. After 15 gruelling months of complying with ever-changing public health orders, half-baked shelter-in-place guidelines and a failed COVID-19 strategy from our clueless politicians, Lord knows we all need the holiday.

Aside from all that, this may be the very last Victoria Day long weekend.

If the Woke left has its way, it will continue on its destructive trajectory of erasing our history, tearing down our institutions and cancelling anything or anyone that doesn’t meet its evolving dictates.

Surely, Queen Victoria will not stand the test of time — according to the totalitarian standards of our progressive betters, that is.

Without bothering to provide any specific examples of this so-called racist legacy, the TDSB simply claims it has a mandate to rename schools in order to “celebrate the diversity of Toronto.”

Two months ago, a group of far-left Antifa vandals likewise desecrated a statue of Queen Victoria at McGill University, covering her in red paint and accusing her of “genocide.”

In a Facebook post taking credit for the incident, the group claimed its actions were meant to shed light on the “criminal legacy” of Great Britain.

“Just put the British Royal Family, all of them, into a limousine, give them a drunk French chauffeur, and let nature take its course,” wrote one member on Facebook.

Regardless of the views of the mob, Queen Victoria was actually quite modern for her time.

She was a strong woman, raised by a single mother and became a single mother herself. She redefined the Royal institution, cutting back on the lavishness of her uncles and establishing the image of the Royal Family as admired and relatable to the growing middle class.

Queen Victoria ushered in a strong and more visible constitutional monarchy, and oversaw a large and democratic transfer of power away from the aristocracy (including herself and her family) and towards elected officials in the House of Commons.

She was the sovereign when Canada was established in 1867, hence why her name was so widely used in the naming of public places. Both the capitals of British Columbia and Saskatchewan — Victoria and Regina — were named after the Queen.

Queen Victoria focused on civics, leading dozens of charities and educational efforts. She introduced the Victoria Cross, given to honour great acts of bravery to British servicemen, awarded based on merit, not rank.

None of this matters, of course. Once the Woke left sets its sights on erasing something or someone, it’s a done deal. No one wants to defend a “racist”, lest they be deemed one as well.

Queen Victoria was not perfect, just like John A. Macdonald, Winston Churchill and other historical figures who paved the way towards building and preserving our free and peaceful society.

We don’t remember and honour these figures for their flaws — their outdated views on “diversity and inclusion” — but instead we honour them because of their contributions and the role they played in shaping our society.

But the Woke left has decided that we must instead judge our past leaders by today’s evolving standards, and thus, no one is safe, least of all a woman so powerful the entire Victorian era is named after her.

If that’s the case, then surely Canada Day and Remembrance Day will be next, followed by Christmas and Easter. They’ll soon demand we remove any British-sounding name and eventually our entire British-inspired system of government.

Nothing can survive the purity tests of the Woke left.

If we don’t stand up for our civilization — our values, our traditions, and history — no one will. The freest, most peaceful, most prosperous, most tolerant and most pluralistic society in human history will destroy itself from the inside.