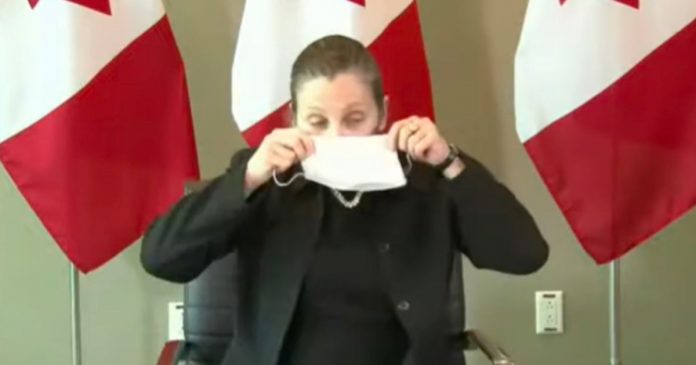 Deputy Prime Minister and Minister of Finance Chrystia Freeland was caught hurryingly putting on a mask during a virtual news conference on Wednesday.

According to The Post Millennial, a clip circulating online appears to show Freeland maskless at the conference for a brief period.

In the CPAC video, Freeland is seen putting on a generic medical mask for less than a minute before taking it off again.

Freeland has accused Conservatives in the past of playing into “conspiracy theories” and not following the science around COVID-19.

True North reached out to Freeland to ask why she felt the need to don a mask momentarily during a virtual press conference but did not receive a response by the time this article was published.

Freeland’s slip up follows a recent trend of politicians being called out for hypocrisy and theatrics when it comes to mask wearing and other COVID-19 public health orders.

Recently, NDP leader Jagmeet Singh apologized after a video surfaced of him hugging a friend while unmasked contrary to public health orders.

“Like most Canadians, I’ve done my best to follow public health advice. Coming back from this event, I did not do enough to follow that advice and I’m sorry,” said Singh in a statement to Global News.

“I will do better to keep my family, our community and all Canadians safe. We cannot let our guard down if we want to beat this virus, and I’m committed to continue to do my best until we’re on the other side of this.”