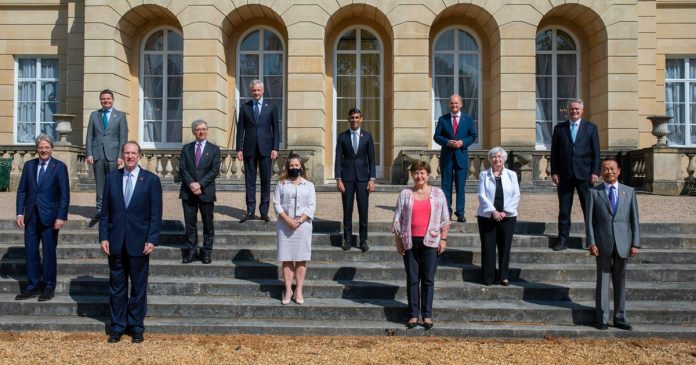 Finance Minister Chrystia Freeland was caught putting on a mask moments before an official photograph for the G7 finance ministers meeting was taken.

Of the twelve people in the official photo, Freeland was the only one wearing a mask. However, photos taken moments earlier show Freeland putting the mask on.

The photo was taken outdoors with distance between participants. Most, if not all, of the ministers had already been vaccinated for COVID-19.

True North reached out to Freeland for comment but did not receive a response by the time this article was published.

Just days earlier, Freeland was caught hastily putting on a mask during a virtual news conference.

In the video from CPAC, Freeland is seen putting on a generic medical mask for less than a minute before taking it off again to begin the press conference.

Freeland has accused Conservatives in the past of believing “conspiracy theories” and not following the science around COVID-19.
Prime Minister Justin Trudeau will go to the United Kingdom for the G7 summit later this week.

52% of Canadians opposed to mandatory booster shots for workplace

Another Trudeau blackface photo emerges on eve of 2021 election

Can the polls be trusted?

52% of Canadians opposed to mandatory booster shots for workplace

Another Trudeau blackface photo emerges on eve of 2021 election

Can the polls be trusted?

Trudeau’s campaign has been a bad rerun of an out-dated Liberal...

How will businesses deal with COVID going forward?