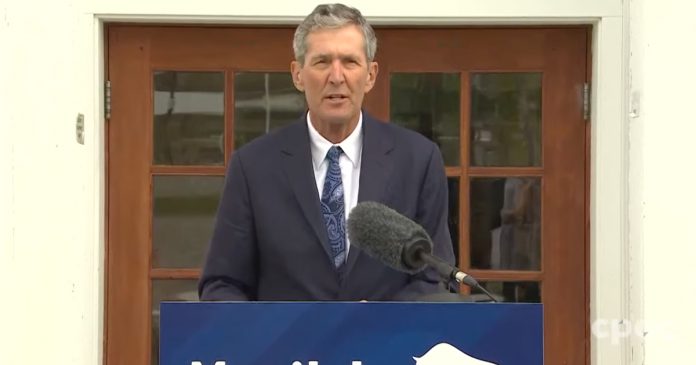 Manitoba Premier Brian Pallister will be stepping down from his post following accusations that he made anti-Indigenous comments when he defended Canada’s founders last month.

Pallister made the announcement on Tuesday following a meeting with his Progressive Conservative caucus in Brandon.

“A few moments ago I informed my caucus colleagues that I will not be seeking reelection as a member of the Manitoba Legislative Assembly and accordingly, a new leader of the Progressive Conservative Party of Manitoba will lead our party into the next election,” said Pallister.

“After almost 10 years as leader of our party and more than five years as our province’s premier, I believe that now is the time for a new leader and premier to take our province forward.”

First elected as premier in 2016, Pallister defeated his NDP predecessor former premier Greg Seligner who held the role since 2009. Prior to being elected premier, Pallister also served as leader of the Progressive Conservative Party of Manitoba since 2012 and was an MP in the House of Commons from 2000 to 2008.

Under Pallister’s watch during the COVID-19 pandemic, Manitoba introduced some of the harshest lockdown measures including shuttering non-essential items in stores, shuttering churches, banning outdoor sports and other stringent measures.

On July 7, Pallister spoke on the “good and bad aspects” of Canada’s history in response to the toppling of Queen Victoria and Queen Elizabeth statues in front of Manitoba’s legislature on Canada Day.

“The people who came here to this country before it was a country, and since, didn’t come here to destroy anything — they came here to build,” said Palllister at the time.

“We need to respect our heritage just as we need to respect one another. Not to find fault. Not to tear down, not to highlight every failure, but rather to realize that we’re a complex country as we are made up of complex people.”

As reported by True North, dozens of statues and symbols of Canada’s heritage were attacked and defaced ahead of Canada Day this year in response to the announcements regarding residential school burial sites earlier this year.

Far-left activists used the occasion to promote anti-Canada messaging forcing municipalities across the country to cancel their own Canada Day celebrations.

Approximately 20 cities and towns spanning five provinces and territories fully cancelled or altered their Canada Day events in response to the campaign.