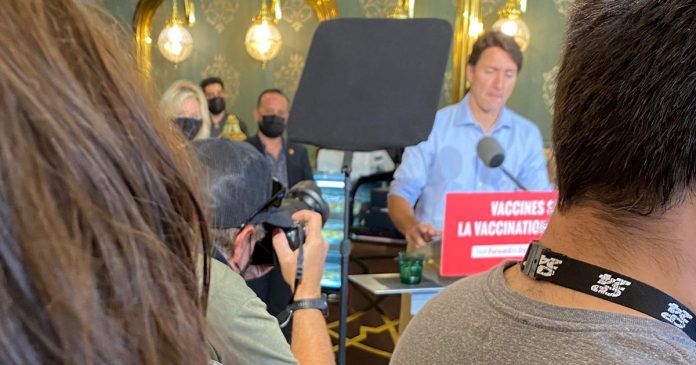 Liberal Party leader Justin Trudeau ignored questions from reporters on whether or not his campaign appearance at a Mississauga restaurant on Friday broke Ontario’s COVID-19 indoor gathering limits.

“There are more than 25 people in this fairly tight and crowded space and provincial law in Ontario currently limits indoor gatherings to 25 people. Are you breaking the spirit if not the letter of the law to hold a party event and lecture the premier of Ontario on vaccine passports?” asked a reporter.

“Canadians are facing a really important choice right now. Cutting over the past number of months, Canadians saw what kind of big decisions, big choices, their government had to make to keep people safe, to make sure we got through this pandemic better than most other countries around the world,” Trudeau responded.

“And our ability to do that and to continue to do that is what’s at stake here in this election. The Conservatives have made it very clear they’re not even going to tell their candidates to get vaccinated. It’s not how we get through this pandemic.”

During the same campaign stop, Trudeau admitted that not all Liberal candidates have been fully vaccinated when further questioned on his policy that every individual running under the party banner must have received the vaccine.

“Every single Liberal candidate agrees fully with our approach on this. We have ensured that all our candidates have been vaccinated or are getting vaccinated. I believe there’s a couple who are about to get their second dose now, but we take very, very seriously the responsibility we all have if we’re getting out there going door to door to keep Canadians safe, and we absolutely will do that,” said Trudeau.

As exclusively reported on by True North, Trudeau is currently fielding a candidate in Calgary Nose Hill who has made controversial claims regarding vaccinations in the past.

Dale-Walker also claimed that Conservatives should be forced to pay $20,000 so that they can receive their COVID-19 vaccinations because they are capitalists.