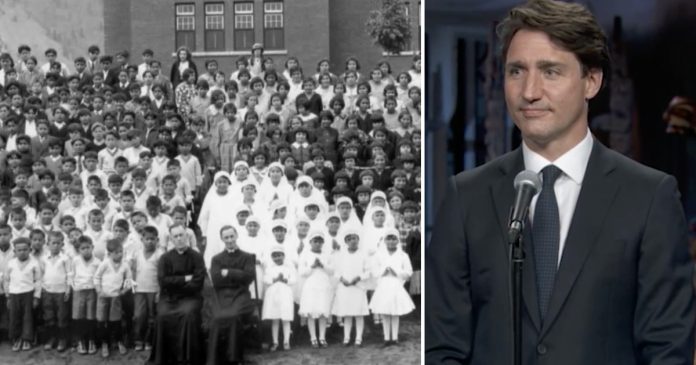 Justin Trudeau isn’t saying whether Canada is still engaging in genocide against Indigenous women and girls.

In 2019, Trudeau said he accepted a finding from an inquiry into missing and murdered Indigenous women and girls that a “genocide” was currently taking place in Canada.

“We accept their findings, including that what happened amounts to genocide,” Trudeau said at the time.

Asked Wednesday night in a post-debate scrum in Gatineau whether that was still the case, Trudeau side-stepped the question, instead touting his visit to a former residential school in Saskatchewan.

“When I visited Cowessess First Nations to grieve with them over the unmarked graves of the children that we had so cruelly mistreated as a country and ripped away from their families over the past many, many generations and decades, we also took a very concrete step forward on removing kids at risk from the provincial system of treatment and keeping them in their communities, in their language,” Trudeau said.

“And it is concrete steps like that that actually doesn’t (sic) just grieve over the terrible tragedies of the past but takes steps to correct and move forward that makes all the difference.”

Trudeau was referring to the June 2021 announcement by the Cowessess First Nation in Saskatchewan of a burial site with 751 unmarked graves near the site of the former Marieval Indian Residential School. However, a local band member said the graves were in an existing cemetery and included children and adults, both Indigenous and non-Indigenous.

Weeks later, Trudeau signed an agreement transferring child welfare responsibilities from the provincial government to the Cowessess First Nation itself, saying children “need to be kept by, protected by, supported by, and taught by their communities.”

Trudeau did not say how this move counters the “genocide” assertion in the Missing and Murdered Indigenous Women and Girls inquiry report, which said genocide is driven by “state actions and inactions rooted in colonialism and colonial ideologies.”

The Cowessess graves were announced weeks after a similar claim of 215 unmarked graves at a site near the former Kamloops Indian Residential School in British Columbia. Researchers later clarified that the findings included roughly 200 graves.

At the time, Trudeau ordered flags at Canadian government buildings be lowered to half mast, where they’ve remained since. Conservative leader Erin O’Toole has said it’s time for the flags to be raised again, arguing a commitment to reconciliation requires pride in Canada.