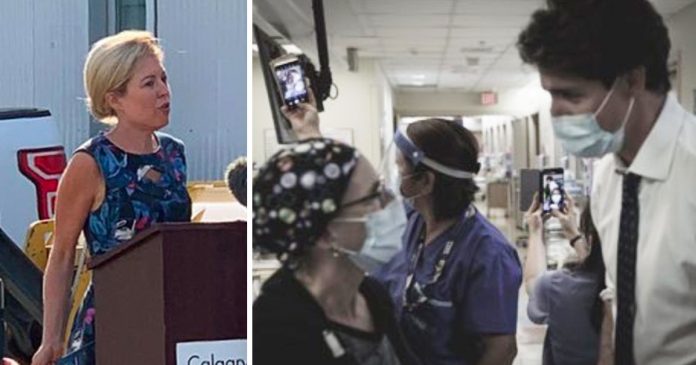 To date, Trudeau has visited the Toronto General Hospital and the Ottawa Hospital where he stopped briefly earlier this month for photo-opportunities.

In an emailed statement to True North, the Calgary Nose Hill candidate noted that while many Canadians can’t see their sick loved ones, Trudeau gets to woo voters in hospitals.

“It’s extremely concerning that Justin Trudeau decided to campaign in a hospital twice during the fourth wave of the pandemic during an election he called,” Rempel Garner told True North.

“Some individuals could not see their family members in the hospital due to visitation rules, but Justin Trudeau thought it would be a good idea to campaign in a hospital. It was shameful to see him once again put his own political interest ahead of Canadians.”

According to each hospital’s respective COVID-19 policy, visitor restrictions currently remain in place at both locations. In Toronto, only up to two people can be at a patient’s bedside while in Ottawa patients can only have two daily visits with one person at a time.

On Monday, as hospitals across Canada dealt with protests against mandatory vaccines and vaccine passports, Trudeau vowed to make it a crime to block access to hospitals and other health care facilities.

“It’s not right that the people tasked with keeping us safe and alive during this pandemic should be exposed to hatred, violence, fear and intimidation,” said Trudeau in Vancouver.

As a result of the COVID-19 pandemic, hundreds of thousands of surgeries and consultations have been cancelled. A March 2021 report by SecondStreet.org revealed that 353,000 different procedures were axed by hospitals all across Canada.

Critics have accused the Trudeau government of failing to ensure that Canada was prepared to deal with a health crisis such as the COVID-19 pandemic. Despite the Public Health Agency of Canada receiving $675 million from the federal government in 2019, the National Emergency Response Stockpile was heavily understocked.

In total, an estimate by the Treasury Board of Canada found that the government’s handling of the stockpile cost Canadian taxpayers $1.8 billion in the midst of a pandemic.