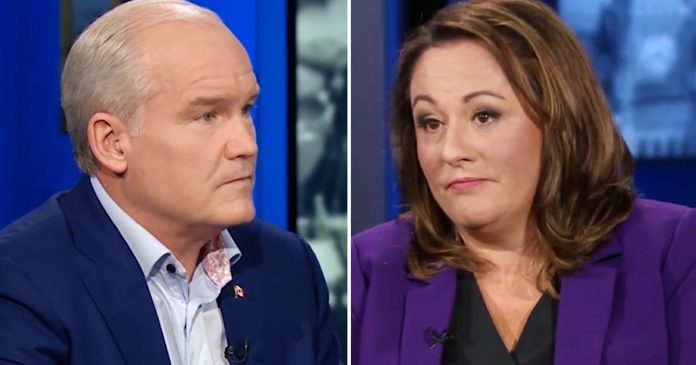 A Sunday afternoon election interview of Erin O’Toole hosted by CBC’s Rosemary Barton featured questions heavily skewed towards issues important to Liberal voters while ignoring the priorities of other Canadians.

The interview was the first of a four-part CBC series titled Canada Votes: Face to Face with the Leader.

Throughout the 46-minute exchange, Barton repeatedly interjected with comments and questions echoing Trudeau’s campaign messaging, raising questions about the objectivity of the network.

A majority of the program was dedicated to topics such as climate change, mandatory vaccines, systemic racism and other left-wing issues. As revealed by an exclusive poll commissioned by True North, the top issues for Conservatives are government spending, the economy and COVID-19 recovery. The CBC program spent very little time dedicated to these topics.

On the issue of healthcare, Barton parroted misleading accusations from the Liberal campaign that O’Toole wants to introduce private healthcare into Canada at the cost of its universal healthcare system.

“You say provinces can make decisions in their jurisdictions and make innovations – that doesn’t sound like someone who will enforce the Canada Health Act… If you’re PM, can someone pay for access to a service faster than the rest of us on a waitlist?” Barton asked O’Toole.

In August, Trudeau claimed that O’Toole “wants to bring private, for-profit health care to Canada” – a line repeated by the Liberals in recent weeks. Like Barton did on Sunday, Trudeau also insinuated that under O’Toole “the wealthiest pay to jump ahead in line.”

Despite these claims, O’Toole has made it clear both in his party platform and on the trail that he will maintain Canada’s universal healthcare system. On top of that, private healthcare already makes up around 55% of healthcare spending in Canada, a point never addressed by Barton in the interview.

Not only was Barton’s line of questioning as a moderator hostile towards Conservative positions, questions from handpicked CBC viewers were also found to have a Liberal bias.

At one point, Edmonton-based Grace Peng essentially asked O’Toole how he would deal with Conservative MPs whose views were found to be not progressive enough.

“Those are the previous Paris commitments,” Barton said of Trudeau’s decision to change Canada’s emission targets in 2021. “We now have new ones.”

During the interview, Barton also pressed O’Toole on his Conservative leadership slogan “Take Back Canada,” which she implied was being divisive.

“When you were running for leader, you talked a lot about ‘taking back Canada’ …that kind of language doesn’t seem to be a ‘uniting’ kind of language. Do you feel like you contributed to division?” asked Barton.

In 2019, Rosemary Barton and another CBC journalist were initially named in a copyright lawsuit over a campaign ad which featured CBC footage by the public broadcaster against the Conservative Party of Canada. CBC eventually lost that lawsuit.

In its platform, the Liberals pledged an additional $400 million in taxpayer funding for the CBC/Radio-Canada. This is in addition to the $1.2 billion the state broadcaster already receives on an annual basis.

TERRAZZANO: Is anyone in Ottawa going to do anything about inflation?