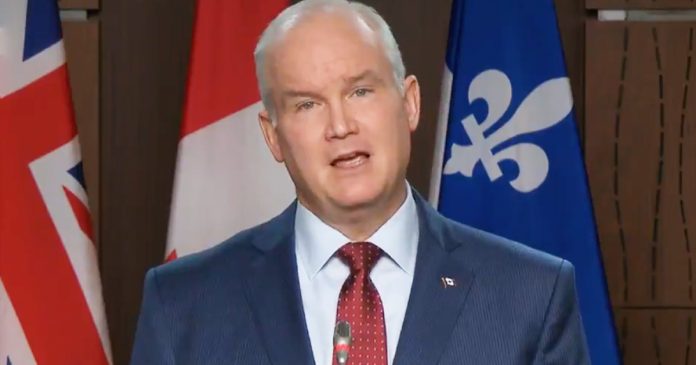 A petition to recall Conservative leader Erin O’Toole following his failure to unseat Prime Minister Justin Trudeau has twice as many signatures as a counter-petition to keep him at the helm.

In comparison, a petition by Conservative activist and former campaign manager Fraser Macdonald to have O’Toole remain in the party’s top spot had 1,897 signatures at the same time.

The two duelling petitions were launched in the immediate aftermath of last week’s election, in which the Conservatives lost seats.

According to Chen, O’Toole’s campaign “betrayed the principles” of the Conservative Party by putting forward a plan that abandoned fiscal responsibility, avoiding a leadership review, supporting vaccine passports and embracing a carbon tax.

Since his defeat, critics have accused O’Toole of moving the party too far to the left to woo Liberal and progressive voters. As reported by True North, leading up to election day, O’Toole flip-flopped on key promises to his base including on gun control and defunding the CBC.

“The sad evidence is that O’Toole’s move to the centre did not attract new voters, yet it alienated the right-wing and yielded ground to Maxime Bernier’s People’s party,” wrote Oliver.

“There is an economic and cultural route to broaden the appeal of Conservative values and policies: bring the public to you, rather than mimic the left-wing’s latest faddish ideals and retreaded socialist truths. That is what leadership is all about.”

Despite the crushing defeat, O’Toole has insisted that he desires to stay on as party leader.

In a recent desperate bid to overcome the growing movement to have him recalled from leadership, former Ontario organizer for O’Toole’s campaign Dan Muys sent volunteers an email asking them to sign Macdonald’s petition.

“When our CPC caucus meets for the first-time post-election, it will be better able to speak to more Canadians. We now have a younger caucus with more women, Indigenous and LGBTQ+ representation, and greater regional diversity with our growth in Atlantic Canada,” wrote Muys in the email.