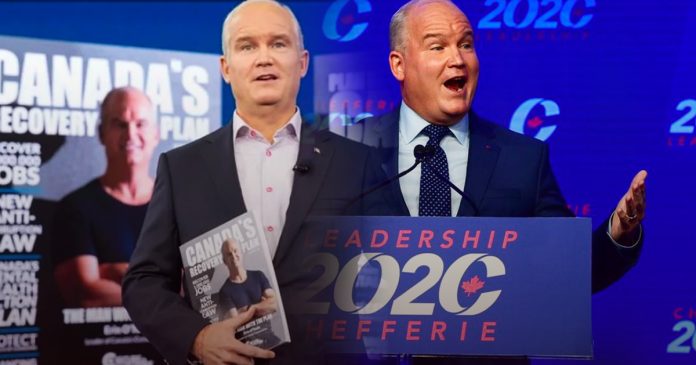 As the election results continue to roll in, it is becoming clear that Conservative Party Leader Erin O’Toole’s gamble to attract progressive and Liberal voters has largely failed.

O’Toole was unable to unseat the Liberals despite reassuring voters his party was “not your dad’s Conservative Party.”

True North has compiled a list of every time he has flip-flopped on campaign promises made to his base.

Proposing a carbon tax despite promising the opposite

During his Conservative leadership campaign last year, O’Toole was adamant that he would repeal the Liberal government’s federal carbon tax.

At the time, O’Toole signed a pledge with the Canadian Taxpayers Federation vowing to not introduce a carbon tax if elected.

Despite these promises, O’Toole would later propose his own scheme to tax Canadians for carbon emissions. While on the campaign trail, O’Toole eventually went further by refusing to commit to scrapping Trudeau’s carbon tax.

Walking back pledge to defund the CBC

During his leadership campaign, O’Toole was unequivocal that he would defund and privatize CBC’s English properties. His general election campaign platform was far less clear.

In the Conservative platform, O’Toole only pledged to “review” CBC’s mandate if elected.

In the midst of the 2021 election campaign, O’Toole reversed a key position, betraying his own Conservative platform, stating he would maintain the Liberal government’s bans on over 1,500 firearms.

Prior to the flip-flop, O’Toole said he would repeal both C-71, which increased restrictions on gun owners, and the sweeping Liberal order-in-council from May 2020.

Despite evidence that the order-in-council negatively impacts law-abiding gun owners without putting a dent in gun crime, O’Toole gave into Liberal pressure to fall in line.

Although O’Toole repeatedly claimed that under his leadership, Conservative caucus members will be able to vote freely, he later said MPs who don’t fully support his platform won’t be allowed to sit in his caucus.

During the 2020 leadership race, O’Toole said that free votes would be a “fundamental part” of his vision for the party.

“I have been quite clear on this both in the last leadership race and in this one, that the fundamental freedoms of MPs and the rights of free votes on issues of conscience is a fundamental part of our party,” O’Toole said in a 2020 interview with pro-life political action group RightNow.

Despite those claims, O’Toole issued a hamfisted ultimatum to candidates in August.

“I want to make it very clear: this is the plan I am running on. It’s the plan Conservatives are running on. All of them,” O’Toole said.

“If I am elected prime minister, it is the plan I will implement. If there are candidates who don’t support it—or any other part of Canada’s Recovery Plan—they won’t be sitting in the caucus of a future Conservative government.”

In the midst of the 2021 election campaign, O’Toole betrayed a former vow to protect the conscience rights of healthcare professionals whose beliefs prevent them from performing services such as euthanasia or referring them to perform a similar procedure.

“They will have to refer, because the rights to access those services exist across the country,” said O’Toole.

“We have to respect conscience rights but allow there to be referrals.”