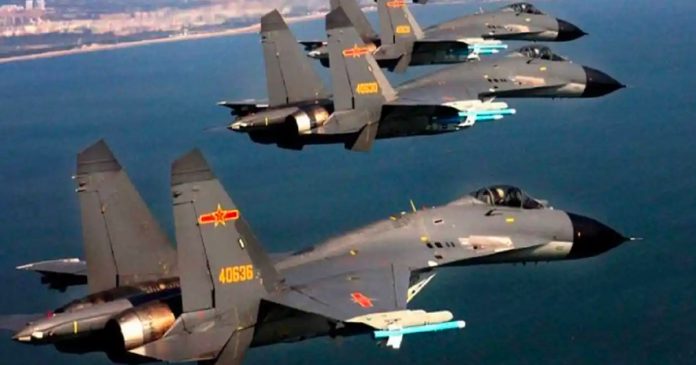 As China marked the anniversary of the founding of the People’s Republic of China, the Communist nation flexed its military muscle over the democratic island nation of Taiwan.

The first batch of Chinese aircraft flew close to the Pratas Islands. The second set flew down into the Bashi Channel – a waterway that links the Pacific with the disputed South China Sea.

Despite Beijing’s claims that Taiwan is part of its territory, the island nation says it is an independent country and will defend its freedom and democracy.

While China has yet to confirm or comment on its latest show of force, this isn’t the first time the Communist nation has exerted itself upon Taiwan. In June, 28 Chinese military aircraft flew into Taiwan’s air defence zone.

China’s latest incursion comes days after Britain sent a warship through the Taiwan Strait for the first time since 2008 — a move that challenged Communist China’s claim to the controversial waterway.

In response, China’s military accused Britain of acting out of “evil intentions to sabotage peace and stability in the Taiwan Strait”.

Critics of Prime Minister Justin Trudeau have called on the Canadian government to do more to support Taiwan and to stand up to the Chinese regime.

“China is emboldened because it believes that the West, Canada included, isn’t just in retreat — it’s collapsing on itself. This isn’t abstract Marxist theory. It comes from reading our papers, listening to our artists, athletes, academics, politicians,” tweeted Mulroney.

“Especially our politicians. National politicians, like the Prime Minister, are not more thoughtful, or even particularly concerned about how their statements resonate abroad, indicates how obsessively, narrowly, and dangerously inward-focused government has become.”

According to a recent report by the Canadian Security Intelligence Service, Canadians see the Communist Chinese regime as the biggest threat to Canada’s national security.