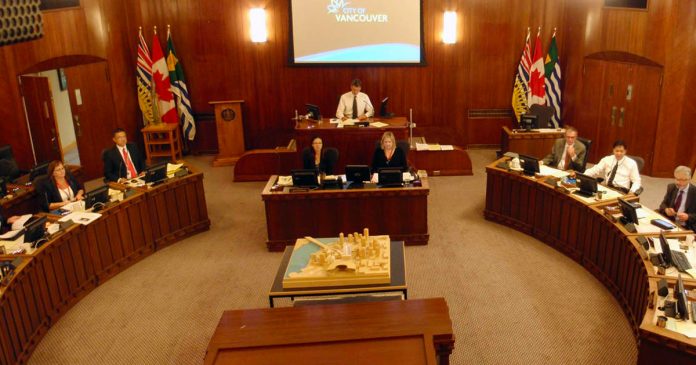 Vancouver City Council voted on Thursday to support a program that would provide drugs to people at risk of overdosing.

Vancouver City Council voted 10-0 in favour of the motion. Vancouver city councillor Colleen Hardwick did not vote because she was absent.

Vancouver city councillor Jean Swanson said in the motion that the Drug Users Liberation Front (DULF) and the Vancouver Area Network of Drug Users (VANDU) have applied to the Canadian government for an exemption under Section 56(1) of the Controlled Drugs and Substances Act (CDSA) to allow them to distribute drugs in the city.

“Almost six precious humans in BC die every day from toxic drugs, more than die from COVID,” said Swanson in the motion. “Current methods of providing safer prescription drugs do not work for the vast majority of drug users.”

The motion requests that Vancouver City Council endorse the application of the DULF and the VANDU for a Section 56(1) exemption to supply people with drugs. It calls for city council to ask Vancouver Mayor Kennedy Stewart to write to the Canadian government endorsing this application.

Swanson said the preferable method for administering the drug supply program once approved would be for the DULF and the VANDU to run a “compassion club,” which would see these groups purchase pharmaceutical-grade cocaine, heroin and meth from a licensed producer.

Since these groups do not have permission to obtain drugs how they want to at the moment, a DULF fulfillment centre searches for substances in the illicit market.

This fulfillment centre takes existing illicit drugs, tests them, labels them and reintroduces them into the market without profiting off of them.

People who want to join the “compassion club” will have to go through membership screening conducted by a current member of the DULF as well as a staff member or volunteer. The requirements to be a member are the person is at least 18 years old and is a current drug user.

Swanson said in full operation, the screening process will be used to determine other needs not being met by club membership, such as assistance navigating social support systems and accessing recovery and detox services.

“This model could also reduce the impact of violence of the local street drug market, the cost of health care for people who take toxic drugs, and the costs of police,” she said.

Vancouver was one of the first cities in North America to adopt a harm reduction approach to drug use. This city opened a needle exchange in 1988, and the first safe injection site launched in 2003.

Most of these initiatives are located in the Downtown Eastside, a hotspot for drug overdoses.

A study done by Simon Fraser University health science professor Julian Somers suggested despite the increase in safe drug use services to the Downtown Eastside, better outcomes did not arise. The study determined that out of the 433 drug addicts in a free housing and services program, members of the sample experienced significant personal decline rather than recovery, because of their involvements with crime, large increases in acute care, and prolonged homelessness.