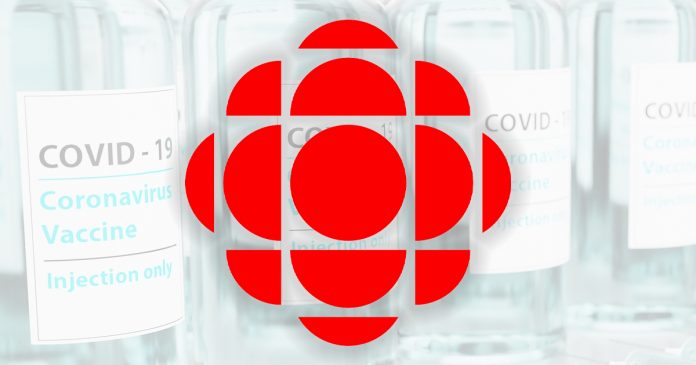 As of last week, 1% of CBC/Radio-Canada staff who have reported their vaccination status are not fully vaccinated against COVID-19.

Earlier this month, True North reported that all CBC staff would have by the end of October to report their vaccination status to the Crown corporation after Prime Minister Justin Trudeau announced a vaccine mandate for public servants and federally-regulated industries.

In response to inquiries on Monday, CBC’s Director of Media Relations and Issues Management Leon Mar confirmed that 75% of employees have already reported their status and that 1% of that segment was not fully vaccinated.

“As of October 20, 75% of employees had completed the mandatory declaration of COVID‑19 vaccination status. Among permanent, contractual and temporary employees of 13 weeks or longer, that number goes up to 81%. The vast majority of respondents are fully vaccinated; only 1% have confirmed that they are not fully vaccinated against COVID‑19. Employees have until October 31 to complete their vaccination status declaration,” Mar told True North in an emailed statement.

The move seems to conflict with a statement by CBC given to True North earlier this year, when the broadcaster suggested that vaccination was a “personal decision” for employees.

“At present, vaccination is a personal decision for each employee to make,” Mar told True North in August.

Mandatory vaccination for the public broadcaster will come into effect on December 1, 2021. Additionally, according to Mar, the CBC is still working out the kinks of the mandate including how to deal with those who refuse to get vaccinated.

“We are still in the process of developing the mechanisms and procedures allowing us to operationalize this new requirement, including what administrative measures will apply to unvaccinated people for whom no medical or religious exemption applies,” said Mar.

“With regard to vaccine exemptions on medical or religious grounds, we will continue to follow the advice of health experts on this issue and we will evaluate such requests on a case‑by‑case basis.”