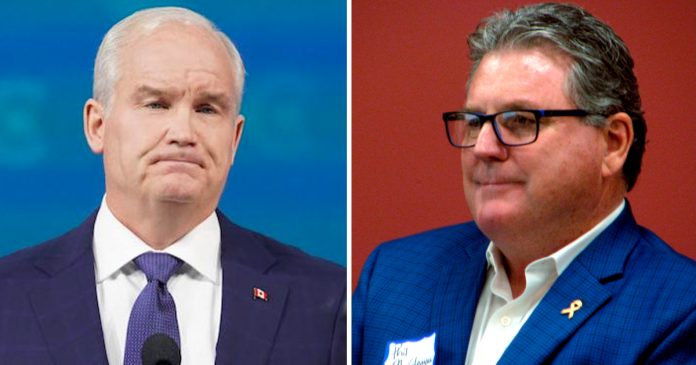 Former Conservative MP Phil McColeman was the latest signatory to join over 3,700 others in signing Senator Denise Batters’ petition to hold a referendum on an early leadership review of Erin O’Toole.

McColeman, who represented the riding of Brantford–Brant from 2008 until 2021, blasted the party for delaying a leadership review until 2023.

“Conservatives of all stripes are stronger when we are unified. Delaying a leadership review until just prior to the next election will only serve to fracture our party further,” said McColeman.

“A leadership review in 2022 gives us an opportunity to unite behind O’Toole or enough time to galvanize behind his successor to win in 2023. I applaud Senator Denise Batters for putting forward this petition. I was honoured to sign it.”

Conservative Leader O’Toole kicked Saskatchewan Senator Batters out of the party’s caucus earlier this week over the petition.

“Seemingly, Mr. O’Toole cannot ‘tolerate’ criticism. After the election, I raised my concerns with Mr. O’Toole directly. He did not respond and he did not act. I then asked publicly that our members have a voice. His response now is to kick me out,” said Batters.

“Several weeks ago, my fellow Conservative Senate Caucus colleague levelled similar complaints against Erin O’Toole, even going further to call for his resignation. Yet, he remains a member of National Caucus while I am expelled. Why the double standard?”

In response, O’Toole has stood by his decision, claiming that it was done for the well-being of the CPC caucus.

“It was a necessary decision to make for the well-being of our caucus, our Parliament and our country,” said O’Toole.

As exclusively reported by True North, former Conservative house leader and current Leader of the Maverick Party Jay Hill also decried the ejection of Batters, calling it an affront to western Canadians.

“The situation with Senator Batters plus the silence of her prairie MP colleagues on issues she identified… equalization, carbon tax and increases, emissions cap, etc. is disgusting for most Alberta and Saskatchewan citizens,” Hill told True North.