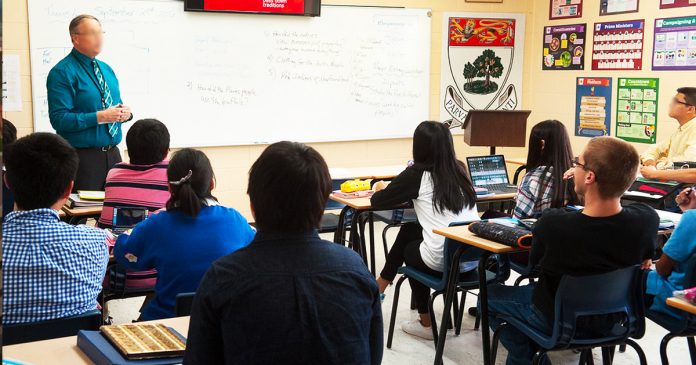 We used to call these people “racists.” But in 2021, they call themselves “anti-racists” and if you disagree with them, then they call you a racist.

This, in a nutshell, is Critical Race Theory (CRT) — the latest fad on the left that is popping up all over the country.

As reported by True North’s Sue Ann Levy (long-time Sun columnist who recently retired and began writing for True North, that is) an Ontario public sector union will soon vote on whether to give black employees two extra days off per year.

Likewise, the Halton School Board recently implemented “weighted voting” — where non-white members’ votes count for more than their white colleagues. And Ottawa schools are debating no longer signing “O Canada” because some believe the song represents racism.

These are all instances of CRT creeping into our society. But it gets worse. The ideology behind these initiatives is now being taught to children.

Levy also reported that the Hamilton-Wentworth District School Board will be teaching a new “anti-racist” lesson plan to kids starting in Kindergarten.

The program — called “Learn.Disrupt.Rebuild” — demands that teachers “bring race into the conversation” and teach them that racism is a defining part of our society.

They teach trendy leftists concepts like “white privilege” and “white fragility” and they tell children that Canada was built to “serve the interests of white people.”

This is a core belief held by those pushing CRT. They reject the idea that Canada and other Western liberal democracies were built on principles like justice, peace, freedom and equality, and instead insist they were built on concepts like racism, colonialism and White Supremacy. They argue that our systems and institutions are so steeped in racism that they must be torn down and rebuilt on the basis of equity – the idea that different people need different levels of support based on the colour of their skin.

I spoke to one of the foremost critics of CRT, a Brampton-based independent writer and scholar named Samuel Sey. Sey runs the website www.SlowToWrite.com where he has thoughtful essays exposing and dissecting this ideology.

Sey was a recent guest on my podcast, and he explained that “equity is borrowed from the Marxist concept of equality of outcome.”

“In fact, when we hear the term ‘woke’ which is associated with Critical Race Theory, it’s really a modern version of class consciousness, where the oppressed become conscious of their oppression — that’s really what it means to be woke.”

“They reject these good systems — the ones that I, as an immigrant, left my country with my mum to come to Canada to be privileged to be a part of — these free and impartial systems that we have in Canada. They want to abolish all of that,” he said.

Sey has a different perspective. He told me that 200 years ago, some of his ancestors were captured in Africa and sold into slavery in the New World. They crossed the Atlantic as prisoners on slaves ships.

Two hundred years later, Sey and his mother “willingly, happily” chose to cross the same Atlantic ocean “to come to this great country.”

“That’s progress,” he said. But added that CRT ignores real progress and instead teaches that “Canada is racist, Canada has always been racist and Canada will always be racist.”

“That’s wrong,” he told me, and encouraged people to reject this racist way of thinking.