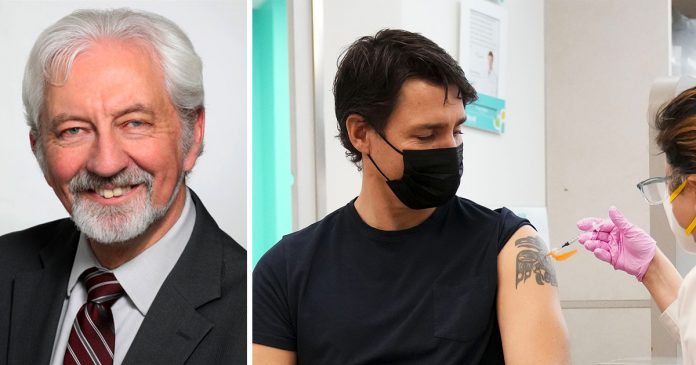 “Recent statements by the Hon. Jean-Yves Duclos, minister of health—regarding the possible imposition of mandatory vaccinations—have heightened tensions and added to the concerns felt by many Canadians about the erosion of our rights and freedoms guaranteed under the Charter,” said Taylor in a letter to Prime Minister Justin Trudeau.

Taylor went on to tell Trudeau that proposing vaccine mandates was “a shameful and cowardly act by your government and should be withdrawn immediately.”

The damage caused by COVID-19 restrictions, Taylor added, have outweighed the benefits. He said when the effects of these restrictions on mental illness, drug abuse, suicides and socialization of children are considered, “it is obvious that the policies now in place have caused tremendous damage to our nation and to nations around the world.”

Taylor said that he would be happy to introduce Trudeau to doctors and scientists who could help “chart a more effective course so we can turn the corner on this pandemic.” He added there have been thousands of people who have been terminated from their jobs and should be rehired as soon as possible.

“We need them to help us rebuild our shattered economy, our groaning healthcare systems and crumbling social institutions,” he said. “Mr. prime minister, you have an opportunity, if you act quickly, to mitigate some of the damage caused by the ill-conceived policies of the last year and a half.”

The Canadian government is proposing to force millions of unvaccinated Canadians to receive vaccines against their will.

Duclos said on Jan. 7 that unvaccinated people are “a burden on health care workers,” and that provincial governments should consider making COVID shots mandatory.

“That’s why I’m signalling this is a conversation which I believe provinces and territories, in support with the federal government, will want to have over the next weeks and months,” Duclos said.

Quebec became the first province in Canada to make vaccination mandatory for adults, with fines for those who do not comply. Premier Francois Legault announced on Jan. 11 that unvaccinated Quebecers would be charged a fee for refusing the vaccine.