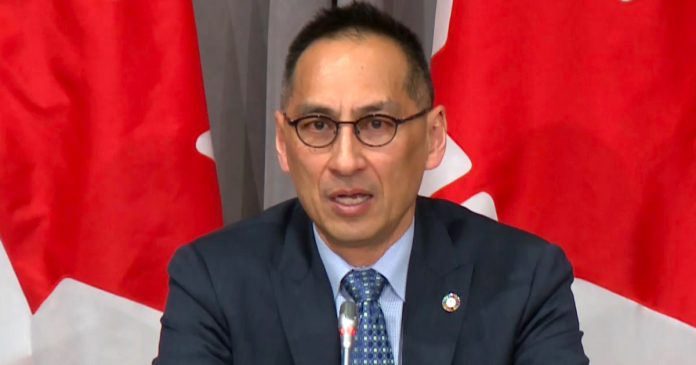 The Public Health Agency of Canada’s (PHAC) deputy chief epidemiologist Dr. Howard Njoo said on Friday that educating Canadians on the benefits of the COVID-19 vaccine was a better approach than coercion.

According to Blacklock’s Reporter, Njoo told reporters that vaccination must remain a “voluntary choice.”

“From a public health perspective we want people to be sort of informed and make that a voluntary choice to get a vaccine,” said Njoo. “We know vaccines are a very important tool, safe and effective in terms of how we manage not just the Omicron variant wave right now but for Covid-19 into the future.”

Njoo also said that when it comes to mandating masks, encouragement would have better outcomes than force.

“People should be encouraged. It doesn’t have to be because there’s a mandate. It’s because people see the value in and of itself to protect themselves and protect others,” said Njoo.

Despite Njoo’s and other health officials’ advice to governments to stick to soft soap, some provinces are becoming increasingly coercive in their efforts to get people vaccinated.

Critics have accused the Quebec government of coercion after it announced a province-wide mandatory vaccination policy earlier this month. According to Premier François Legault, unvaccinated Quebec residents would be forced to contribute an unspecified monetary fee due to their personal medical decisions.

According to a video posted on social media by the Conservative Party of Quebec, Arruda stated that he would resign from his post if he felt that the government’s COVID measures were “bulls**t.”

As of Monday, unvaccinated Canadians are now barred from entering most big box stores in the provinces after being told they require proof of vaccination. Those hoping to access pharmacies at places including Walmart or Costco would only be allowed to be on the premises with an employee chaperone.

A petition for Legault to be removed from his office has recently surpassed 230,000 signatures.