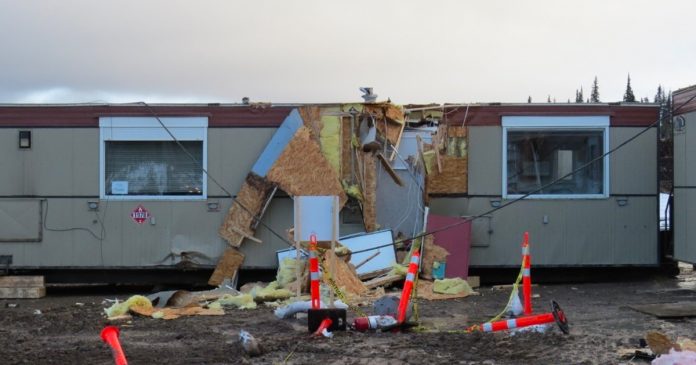 On Feb. 17 a gang of criminals descended on the worker camp near Houston, B.C. with weapons and flares. RCMP Chief Superintendent. Warren Brown called the incident a “calculated and organized violent attack that left its victims shaken and a multimillion-dollar path of destruction.”

With no arrests made during the incident or since, the RCMP released a series of videos on Feb. 22 asking for the public’s help in identifying the assailants.

An anonymous submission to the far-left extremist website Montreal Counter-Information nonetheless called for others to launch similar assaults against the pipeline and its workers.

“As anarchist individuals living in the North who are supportive of struggles in defence of the land and against ongoing colonization by Canada and its corporate interests we declare our support for this action and encourage others to do so,” the post read.

“May others continue this fight, take action against (Coastal GasLink), Canada and on-going colonization where they stand and draw inspiration and courage from this action as we do.”

Montreal Counter-Information is an extremist publication for anarchists that regularly publishes reports on criminal activity and even instructs users on how to create incendiary devices such as molotov cocktails.

This was not the first time that opponents of Coastal GasLink have attacked the work site. The beleaguered development has had to face numerous sabotage attempts and blockades as it nears completion.

Although the attack on critical infrastructure in B.C. took place while the Emergencies Act was still in effect, Prime Minister Justin Trudeau did not apply it to track down the suspects involved or to freeze their assets like he did with the Ottawa trucker convoy demonstrators.

As exclusively reported by True North, the CBC has partnered with radical anarchist activist and filmmaker Franklin Lopez to produce a documentary on the protests targeting Coastal GasLink. Lopez’ work has frequently appeared on Montreal Counter-Information and other affiliated extremist websites.

Most recently, the Alberta government’s Canadian Energy Centre launched a complaint against the public broadcaster for the decision to partner with Lopez.