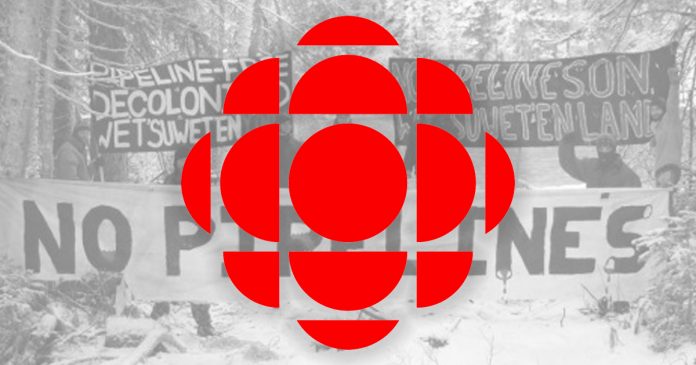 CBC has solicited the work of a radical anarchist activist to produce a documentary on the ongoing protests targeting BC natural gas pipelines.

According to a tweet, Franklin López has recently become involved in the CBC production Yintah, which centres on so-called Wet’suwet’en resistance to the Coastal GasLink pipeline in northern BC.

“Well the cat’s out of the bag, our film Yintah is a CBC production,” tweeted López on Dec. 6, 2021. López’s Twitter account has since been set to ‘protected’ status although his Instagram account also identifies him as the “Producer/Editor” of the documentary.

López has been a staple figure in the Canadian anti-authority far-left for years and is the founder of the multimedia company sub.Media. Recently, the Western Standard also identified López as a “hardcore anarcho-socialist.”

The company’s productions include various short films and documentaries on an amalgam of anarchist and anti-authority topics. Videos with titles such as “Oil Pipelines Are Easy To Shut Down” and “How to Paralyze a Country” are commonly featured on sub.Media’s Vimeo channel.

The content is also a go-to resource for extremist Antifa websites that endorse criminal and violent tactics to achieve their ends. One of those websites, Montreal Counter-Information, linked to sub.Media’s video on how to shut down critical infrastructure such as pipelines.

As exclusively reported by True North, the extremist Montreal Counter-Information has in the past called for attacks against police, said that looting is legitimate and instructed supporters on how to make Molotov cocktails.

“Now that the cages are chock full and that people slowly die behind bars, what could happen if the (prison) guards’ cars would unfortunately meet with a screwdriver/hammer/firestarter? If the people who lock up and stand guard, already under constant pressure, were hit and beaten while going back home?” wrote an anonymous April 13, 2021, post on Montreal Counter-Information.

When True North confronted CBC with these facts and asked whether taxpayer funds were going into an anarchist activist’s pockets, CBC Head of Public Affairs Chuck Thompson claimed that López was being paid by CBC’s production partners.

“For over 20 years, Frank López has publicly identified as an anarchist filmmaker,” Thompson told True North. “Regarding his specific roles on this particular film, he is an editor and also one of the producers. Accordingly, Mr. Lopez is being paid for his work by our production partners.”

When asked follow-up questions about the identities of those production partners and whether CBC was aware of López’s troubling connections, Thompson said the following: “You have our response, we have nothing more to add.”

In the Canadian Security Intelligence Service’s 2019 Public Report, “anarchist and anti-authority violence” was classified as a national security threat and an example of “Ideologically Motivated Violent Extremism” alongside ethno-nationalist violence, violent misogyny and anti-LGBTQ violence.

Recent protests targeting pipeline sites in northern BC have resulted in heavy equipment sabotage and hundreds of workers being stranded without food due to illegal blockades.

The issue of far-left infiltration into Canada’s public broadcaster recently reared its head after former CBC producer Tara Henley revealed that she left the Crown corporation due to the organization’s “radical political agenda.”

The CBC is funded by Canadian taxpayers to the tune of $1.2 billion.