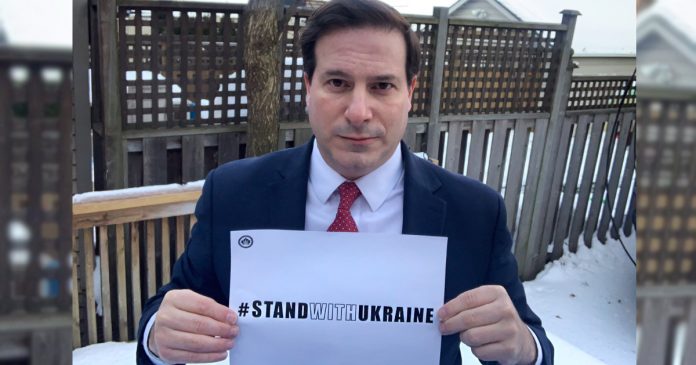 When the Russian Federation invaded Ukraine on Thursday after weeks of speculation and rising tensions in the region, many Canadians stood with Ukraine and condemned Russia for its military aggression against its neighbour.

The federal government has announced sweeping sanctions against Russia, while Canadian volunteers have reportedly been volunteering by the thousands to travel to Ukraine to fight in its International Legion of Territorial Defence.

While Canadian politicians in all parties and at all levels of government have expressed support for Ukraine, some have done so in ways that, while well-intentioned, just don’t seem that useful.

True North has gathered together six of the least helpful gestures that Canadian politicians have made to show solidarity with Ukraine.

“Ontario stands with Ukraine,” said Ford in a tweet. “To show our continued solidarity with Ukrainians here and around the world, we will be illuminating @NiagaraFalls in blue and yellow tonight from 9:00-9:30pm.”

Some of the responses to the announcement were less than impressed.

“Blue and yellow light will solve this, for sure,” said one.

Ford did add that Ontario would be providing Ukraine with $300,000 in humanitarian aid.

Certain Trudeau cabinet ministers – including former defence minister Harjit Sajjan – posted photos of themselves holding up sheets of paper with #StandwithUkraine printed on them in the weeks leading up to the invasion.

“On this Day of Unity of Ukraine, we stand in solidarity with the Ukrainian people and stand up for their right to live free from Russian aggression,” declared public safety minister Marco Mendicino in January.

“The head of defence (yes defence minister) holding up a sign is so Canadian!” said one response.

“Weapons not hashtags,” said another.

Sajjan also announced, however, that Canada would be offering a $120 million loan to Ukraine to build economic resiliency.

Embattled Ottawa mayor Jim Watson ordered the Ukrainian flag to be raised at Ottawa City Hall and encouraged all mayors to do the same.

“I am thinking of the people of Ukraine & the many Ukrainian-Canadians,” said Watson. “I encourage all mayors to raise the flag in their cities in solidarity with Ukraine.”

“If this doesn’t stop the invasion, nothing will,” one Twitter user chirped.

As with Niagara Falls, the CN Tower was illuminated with blue and yellow lights in solidarity with Ukraine.

While some respondents on Twitter expressed support for the move, others were less than impressed.

“Awesome,” said one user. “We should send more weapons.”

2. The Toronto Sign also lit up in blue and yellow

Toronto mayor John Tory had the iconic Toronto Sign illuminated with blue and yellow lights to show support for Ukraine.

“If there is an unprovoked military action taken against our provinces, we expect the rest of the world to line up and support us,” he said in a video. “I’m raising this flag to show solidarity with our wonderful Ukrainian-Canadian community here in the city of Toronto.”

Tory then joined the #StandwithUkraine Toronto rally in Nathan Phillips Square to voice his support for Ukraine.

“(N)ot sure the Ukrainians are feeling the benefit of our good wishes/thoughts and prayers, John,” replied a Twitter user.

Last Friday, Ontario Liberal leader Steven Del Duca had called on the Liquor Control Board of Ontario (LCBO) to remove Russian vodka from their shelves.

“Our allies in Ukraine are under attack by Russia and need our help,” said Del Duca in a press release. “Pulling Russian vodka from the shelves of the LCBO is an immediate action Ontario can take to demonstrate our solidarity with the people of Ukraine.”

According to Del Duca, banning the sale of Russian vodka would somehow hurt Russian financing during their invasion.

“Ontario joins Canada’s allies in condemning the Russian government’s act of aggression against the Ukrainian people, and will direct the LCBO to withdraw all products produced in Russia from store shelves,” said Bethlenfalvy.

“That’s a shame,” tweeted one respondent. “I use Russian vodka to de-grease my driveway and clean some of my tools. Oh well.”

Honourable Mention:  Restaurant renames poutine because it sounds like Putin

A restaurant in Drummondville, Quebec reportedly announced that it would be removing the word “poutine” from its menu and social media accounts because the word sounded too much like the name of Russian president Vladimir Putin.

“This evening, the … team has chosen to temporarily remove the word ‘p**tine’ from its trademark in order to express, in its own way, its deep dismay at the situation in Ukraine,” said the restaurant in a since-deleted Facebook post. “So, from now on, we are the inventor of cheese sauce fries.”

(The restaurant later deleted the announcement after reported threats and ridicule.)