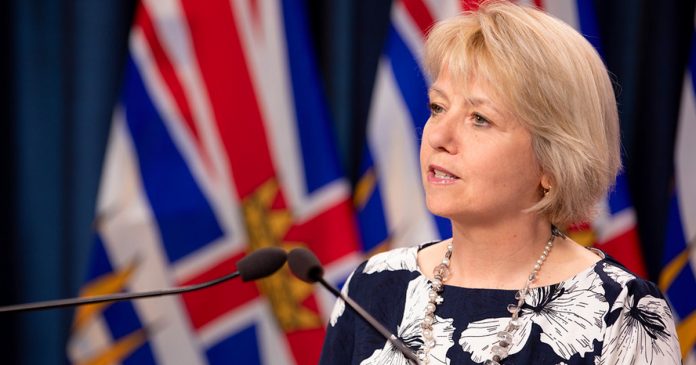 A British Columbia dentist is speaking out against the province’s looming vaccination deadline for private-sector healthcare professionals, saying his licensing college should tell Dr. Bonnie Henry “to crawl back into whichever hole she came out of.”

Robert Johnson, a dentist in Salmon Arm, B.C. posted a strongly-worded video to social media on Wednesday in an effort to raise awareness and rally opposition three weeks ahead of the March 24 deadline imposed by the province.

“Stop doing things that clearly make no sense,” Johnson said. “There’s no science, there’s no logic. There’s no basis for most of this garbage. So, stop doing it.”

In his 10-minute video, Johnson said that chief medical health officer Dr. Bonnie Henry’s mandates have no “scientific, logical, legal, ethical or moral basis,” and that they will have a devastating effect on the province’s already-strained healthcare system.

“There’s a point at which ignorance becomes malice, where it’s simply not possible to be that ignorant except intentionally and maliciously,” said Johnson.

“So, when I look at Bonnie Henry’s mandates as far as I’m concerned there is no scientific, logical, legal, ethical or moral basis for any of them. So, in my mind, that only leaves evil and incompetence, and I don’t honestly know which would be worse, but like I just said, it’s indistinguishable at this point.”

On Feb. 9, Henry announced that B.C. would be extending its compulsory vaccine mandate to cover all remaining healthcare professionals in private practice, including dentists, chiropractors, midwives, acupuncturists, denturists, pharmacists and many others.

Henry made the announcement the same week that four provinces – including Alberta, Saskatchewan, Prince Edward Island and Manitoba – declared they would be dropping their vaccine passports and mask mandates altogether.

Since then, all provinces but B.C. have followed suit, with some now welcoming back unvaccinated workers. These provinces follow the lead of advanced countries around the world, including the UK, Ireland, Denmark, Sweden, Norway, Finland, Iceland and others.

Despite this trend, Henry has continuously doubled down, even announcing Tuesday that people should be prepared for restrictions to return in the fall, and that B.C. would support businesses who wish to keep using vax passes and masks even after policies are dropped.

“So, what I would like to know is, what planet is Bonnie Henry on, because here on Earth, we’re not playing this game anymore,” Johnson said.

“And I also would like to know why there is not one person at the College of Dental Surgeons of B.C. or any of these other colleges and regulatory bodies that has the common sense, critical thinking skills or integrity to tell Bonnie Henry to crawl back into whatever hole she came out of and not come back out again, please and thank you.”

True North had reached out to the B.C. Dental Association (BCDA) after Henry’s announcement on Feb 9., as the BCDA appears to have defended the existing safety and medical privacy of dentists’ offices as late as November.

In a letter sent to the Comox Valley Record responding to a patient’s concerns about COVID, they wrote, “(v)accinations are an important part of preventing COVID-19, but they do not protect 100 per cent against transmission” and that “BCDA knows of no transmissions of COVID-19 between dental professionals and patients in B.C. or across Canada.”

Nonetheless, the BCDA contacted True North to affirm its full support for mandatory government vaccination of dentists in private practices, even as the Canadian Dental Association had called for mandatory vaccination policies for all oral health professionals back in September.

Johnson concludes his video by ridiculing the BCDA’s advice for his dentistry practice that he should hire someone else to run it if he loses his licence over what they called ‘choosing not to get the vaccine.’

“I was like, I can’t, you can’t, you’re not serious,” he said. “You have to be joking. Like, this is actually a hilarious joke at this point.”

True North reached out to the B.C. Healthcare Collaborative, who posted Johnson’s video, but received no response by publication time. The organization’s website, which hosts a blog and gallery of affected workers, announces, “(w)e are vaccinated & unvaccinated B.C. Health Care Professionals who are seeking medical autonomy for our patients & health care workers.”

B.C. began firing workers last week who had been forced onto unpaid leave by vaccine mandates in the fall, despite a crippling labour shortage with frontline care.