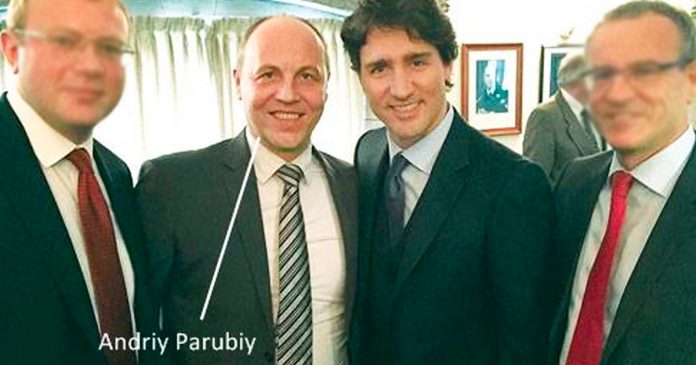 Prime Minister Justin Trudeau and Deputy Prime Minister Chrystia Freeland met with the co-founder of a far-right fascist party in Ukraine, which was styled off of Hilter’s Nazi Party, True North has learned.

Andriy Parubiy served as the equivalent of the legislative speaker of Ukrainian Parliament from 2016 to 2019, and during that time he personally met with Trudeau and Freeland several times.

Earlier in his career, Parubiy was an influential member of Ukraine’s far-right neo-Nazi movement. In 1991, he co-founded the Nazi-styled Social-National Party of Ukraine (SNPU) – a party focused on “racial nationalism” that even adopted the Nazi Wolfsangel symbol as its logo.

In 2004, it was renamed to the Svoboda Party and efforts were made to remove Nazi imagery and expel extreme fascist members from the party. Within the Ukrainian political context, the party is still described as  “ultranationalist” and part of Ukraine’s “far-right.”

According to a report from the Jerusalem Post, as recently as 2016 Parubiy made antisemitic comments. He accused Jews of sending convicts to settle Eastern Ukraine and trying to destroy the genetic memory of the Holodomor.

Parubiy first rubbed shoulders with Trudeau in 2016 while a part of a visiting delegation to Ottawa. The Ukrainian Embassy to Canada detailed the meeting, which also included the then-Minister of Defence Harjit Sajjan.

“During his visit to the capital of Canada, Mr. Parubiy held a number of fruitful meetings with Canadian government officials and politicians,” wrote the Embassy of Ukraine to Canada on Feb. 26, 2016. “First Deputy Speaker had a brief meeting with Canadian Prime Minister the Right Honourable Justin Trudeau and Minister of Defence the Honourable Harjit S. Sajjan.”

Trudeau met with Parubiy again in July of that year while visiting Kiev, according to the embassy. Freeland was also present during this junket and is photographed signing an official agreement.

Freeland met with Parubiy again in May 2019, and posted about it on her official Facebook page.

“Met with Andriy Parubiy, the Speaker of the Verkhovna Rada, and discussed the role that Canadian election monitors played in Ukraine’s presidential elections and will play again parliamentary elections later this year,” noted the message from Freeland.

“Canada stands with Ukraine and its vibrant democracy!” she exclaimed.

The party Andriy Parubiy founded, the SNPU and its offspring Svoboda, have been described by numerous legacy media sources as a “fascist” and even “neo-Nazi” party.

According to the left-leaning magazine The Nation, the longest running weekly news magazine in the U.S., Parubiy also cofounded the far-right group Patriot of Ukraine “whose members would eventually form the core of Azov,” Ukraine’s officially sanctioned neo-Nazi battalion.

The Nation questions whether Parubiy has adequately renounced his neo-Nazi past.

“Although Parubiy left the far right in the early 2000’s, he hasn’t rejected his past,” writes author Lev Golinkin.

“When asked about it in a 2016 interview, Parubiy replied that his ‘values’ haven’t changed. Parubiy, whose autobiography shows him marching with the neo-Nazi wolfsangel symbol used by Aryan Nations, regularly meets with Washington think tanks and politicians; his neo-Nazi background is ignored or outright denied.”

There are several photos of Parubiy marching in a Nazi-styled uniform as a young man, and one such photo was even featured on the front cover of a book alleged to be about white nationalism in Eastern Europe.

According to the mainstream U.K. outlet Channel 4 News, Parubiy’s party was a “fascist party styled on Hitler’s Nazis, with membership restricted to ethnic Ukrainians.”

Parubiy has not been shy about his affiliations with and adoration for the far-right. In 2017, he sang the praises of Nazi collaborator and Ukrainian Insurgent Army (UPA) leader Roman Shukhevych.

“On June 30, 2017 there was a 110th anniversary of the Legend’s birth – that was the date when a legendary warrior, a true military leader of the fighting Ukraine at times of World War II, a general of the Ukrainian Insurgent Army (UPA) Roman Shukhevych had been born 110 years ago,” Andriy Parubiy was quoted as saying by the Verkhova Rada of Ukraine.

In 2011, Parubiy also said that he was “disenchanted with” a decision by the Ukrainian courts to not give Nazi collaborators like UAP founder Stepan Bandera “hero status.”

In February 2022, Canadian Prime Minister Justin Trudeau accused MP Melissa Lantsman – who is Jewish and the descendent of Holocaust survivors – of “standing with those who wave swastikas.”

This was in reference to the Conservative Party’s defence of the Trucker Convoy’s right to peaceful protest. On Day One of the rally, a still-unidentified provocateur walked near the rally with a Nazi flag.

Neither Lanstman, nor any Conservative MP stood with or posed for photos with the Nazi flag guy. Trudeau, Freeland and Sajjan did with Parubiy.