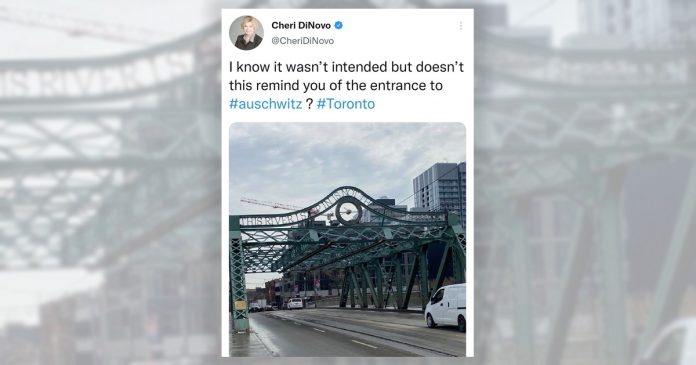 “I know it wasn’t intended but doesn’t this remind you of the entrance to Auschwitz?” said DiNovo in a since-deleted tweet on Monday.

DiNovo included a photo of the entrance to the Queen Street Viaduct, which has lettering reading “The river I step in is not the river I stand in” and a clock.

The infamous entrance to the Auschwitz concentration camp in Nazi-occupied Poland shows a gate reading “Arbeit macht frei,” or “work sets you free.”

“This is a beautiful entrance to a part of the city I love,” said Dabrusin. “As a Jewish person I find the flip remark offensive.”

“We are living in a golden age of idiotic nazi comparisons,” said Kay.

“It was stupid,” she said. “I apologize and the tweet was deleted almost immediately.”

DiNovo works as a minister at Trinity-St. Paul’s United Church (TSP) and Centre for Faith, Justice and the Arts.

True North reported last week that TSP is one of several Ontario churches that has stated that it will be requiring vaccine passports for people entering the church until Mar. 21.

The church has also stated it will require congregants to wear masks past this date despite Ontario repealing the mask mandate for most indoor settings on Mar. 21.

“While we are hopeful that things are starting to get better, we acknowledge that we are still in a pandemic with potentially dangerous consequences for some and we are taking a safety-forward and conservative approach to reopening,” said TSP general manager Aaron Dawson in a statement in February.