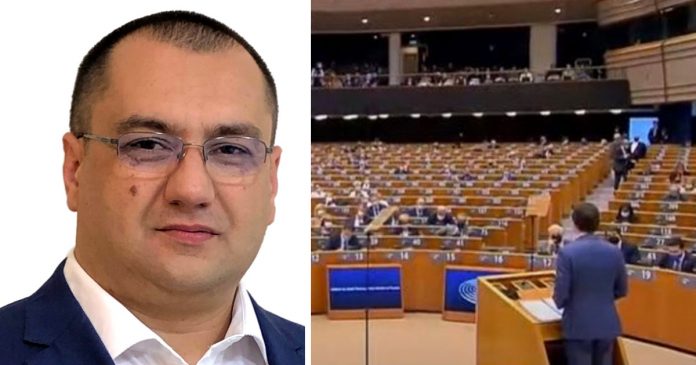 Romanian Member of European Parliament (MEP) Cristian Terheș was one of many EU politicians who savaged Prime Minister Justin Trudeau following his speech in Brussels on Wednesday, refusing to attend and citing Trudeau’s violation of citizens’ rights.

Terheș has been a vocal critic of Trudeau’s crackdown on peaceful Freedom Convoy protesters. In a written statement translated by True North, Terheș accused the prime minister of being hypocritical for lecturing on democracy while quashing freedom and rights at home.

“I refused to validate by my presence the facade of the Canadian prime minister Justin Trudeau,” Terheș wrote. “You can’t come and teach democracy lessons to Putin from the European Parliament when you trample with horse hooves your own citizens who are demanding that their fundamental rights be respected.”

Trudeau, who is on his second trip abroad to discuss the war in Ukraine this month, is facing a flurry of condemnation from European parliamentarians for his treatment of freedom demonstrators in Canada.

After Trudeau invoked the Emergencies Act in February, a militarized police force shut down Ottawa and brutalized protesters in an operation to end the convoy demonstrations against Canada’s harsh COVID-19 measures. One elderly woman was trampled by a riot horse during the crackdown.

“When you, a politician from the “west,” implement in your home methods of repression and the trampling of the rights of your own citizens, who demand their rights be respected, as Putin does at home, you are no better than him,” wrote Terheș. “On the contrary, through the tyranny that you’re implementing you add deceit and hypocrisy, destroying liberty and “western” values.”

Through the Emergencies Act, the Trudeau government also enabled banks to freeze the assets of protesters and donors to the convoy’s fundraisers.

“Canada, once a symbol of the modern world, has become a symbol of civil rights violations under your quasi-liberal boot in recent months,” said Kolakusic. “We watched how you trample women with horses, how you block the bank accounts of single parents so that they can’t even pay their children’s education and medicine, that they can’t pay utilities, mortgages for their homes. To you, these may be liberal methods, for many citizens of the world, it is a dictatorship of the worst kind.”

German MEP Christine Anderson, who is a member of the controversial right-wing party Alternative for Germany, also joined in to voice her displeasure at the prime minister’s presence in the European parliament, calling it a “disgrace to any democracy.”