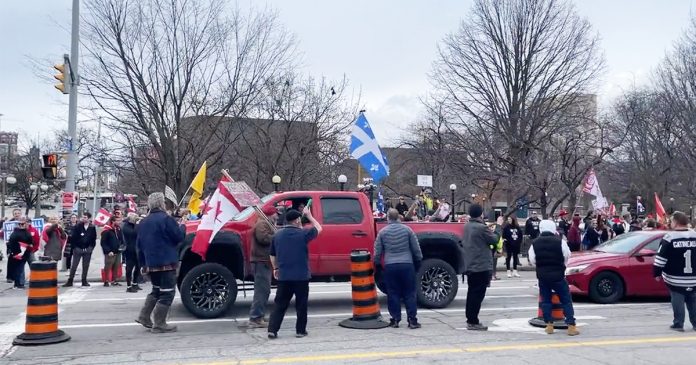 A second freedom convoy of trucks and cars from Quebec made its way through Ottawa on Saturday, cheered by flag-waving onlookers and escorted by Ottawa police.

The fleet left the Quebec City area Saturday morning en route to Vankleek Hill, a town in eastern Ontario with a major truck stop. According to organizers, they will head back towards Quebec City on Sunday.

The leaders of the Quebec convoy said they were fighting for the freedom of future generations and for the end of COVID-19 restrictions. Quebec remains one of the only Canadian provinces that still requires people to wear masks in indoor public settings. The provincial government has set Apr. 15 as the end date for the measure, but concerns of a sixth wave may change that.

Throughout the pandemic, the Quebec government also imposed some of the harshest restrictions in the Western world, including curfews, lockdowns and vaccine passports that limited access to groceries. Quebec also considered taxing the unvaccinated, but ended up backing down after heavy criticism and lightening hospitalization numbers.

The new convoy passed through several Quebec towns and cities on its way to Ottawa, including Drummondville, Montreal and Gatineau. Social media posts by organizer Patrick Tremblay show supporters cheering from overpasses.

Unlike the original cross-Canada Freedom Convoy, whose participants stayed in Ottawa for three weeks, the Quebec convoy drove straight through the city – as police required them to do. Participants crossed the Ottawa River from Gatineau into the nation’s capital and made their way down Laurier Avenue, home to Ottawa City Hall and Confederation Park.

Hundreds of supporters lined the sidewalks along Confederation Park to cheer the convoy on. True North was on the scene to capture some of the sights and sounds.

The convoy then headed down O’Connor Street to Highway 417, which took the demonstration to its final destination of Vankleek Hill.

The fleet of vehicles was initially supposed to reach the capital at 2:30pm but ended up arriving around 4:15pm. It was escorted by what appeared to be an unmarked police van.

Convoy organizers had shared their itinerary with the Ottawa Police Service (OPS) and reminded participants that it is prohibited to honk in the city’s downtown core.

Police also issued a letter in French to convoy participants stating that it was “forbidden at all times” to stop on the road, unless requested to do so by an officer.

OPS also told the participants they would take “a strong police enforcement stance to ensure respectful use of our streets for the exercise of constitutional rights and the maintenance of public safety.”

Police added that the Criminal Code, the Provincial Offenses Act and municipal by-laws would be enforced “in order that residents, visitors and businesses in downtown Ottawa avoid new disruptions by large convoys of vehicles.”

Police made good on the warning and maintained a strong presence in the downtown. A heavy wrecker tow truck was also spotted parked nearby.

Despite these measures, authorities say there were no reported incidents as the convoy made its way through the capital.

The Quebec convoy is the first major freedom event to take place in Ottawa since the Freedom Convoy, which received international attention and attracted thousands to protest on Parliament Hill and across Canada.

The historic demonstrations opposing the erosion of freedoms under COVID-19 were brought to an end shortly after Prime Minister Justin Trudeau invoked the Emergencies Act on Feb. 14. The never-before-used legislation allowed the government additional powers of enforcement, including the freezing of bank accounts of convoy participants and supporters.

Trudeau received major backlash for invoking the act, including from members of the European Parliament last week. Ottawa police also received heavy criticism for their conduct, especially during the last weekend of the Freedom Convoy.

Despite all ten provinces having committed to lifting COVID restrictions including vaccine passports and mask mandates, federal measures surrounding travel remain in place. Federal  health minister Jean-Yves Duclos recently told the House of Commons health committee that there is not an end in sight for these measures.

“The truth is that COVID-19 is still here in Canada and certainly outside of Canada. And that’s what I think we should be mindful of,” said Duclos.
The Liberals and the NDP also voted down a Conservative motion last week that urged the government to end federal mandates and restrictions.