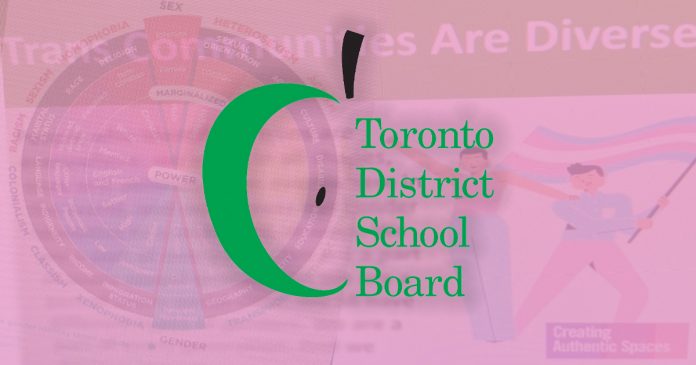 A Toronto District School Board (TDSB) elementary school is hosting a series of workshops on affirming “sexuality diversity in children” and youth.

JK-Grade 8 Rawlinson Community School seminars titled “Affirmation of Gender and Sexuality Diversity in Children, Youth and Families” are being conducted by the organization 519 Space For Change.

According to a Rawlinson newsletter, parents and families are being invited to join the Apr. 12 Zoom event.

“Sessions will focus on Affirmation of Gender and Sexuality Diversity in Children, Youth and Families. We look forward to seeing many of our Rawlinson families at this workshop as we continue to deepen our perspectives and understanding of equity and inclusion,” school officials wrote.

The first workshop of the series already took place on March 9. A tweet by the official Rawlinson Community School Twitter account showed several slides of a presentation which discussed additional concepts such as “colonialism” and “intersectionality.”

519 Space for Change is an LGBTQ City of Toronto agency that has been operating since the 1970s. It has repeatedly partnered with local schools to offer educational and social programs.

This is not the first time that the TDSB has hosted events focused on indoctrinating kids with LGBTQ activism.

As reported by True North fellow Sue-Ann Levy last week, kids as young as 11 were invited to a virtual TDSB LGBTQ conference featuring a performance by the dance group Toronto Kiki Ballroom Alliance, which hosts photos and videos of highly sexualized dances on its social media.

Levy also reported on Wednesday that a TDSB high school had hosted a talk where presenters told officials that students should be able to use whichever bathroom they wanted based on whichever gender they identified with.Educators were also told not to inform parents of students’ gender identity without the student’s consent.

“A student’s self identification is the sole measure of the student’s gender,” documents stated.

The presentation came in the wake of a Halton District School Board directive a few months earlier that stated that students should also be able to use whichever change room they feltl was “most gender affirming,” and that female students who were uncomfortable with the arrangement should be asked to change elsewhere.