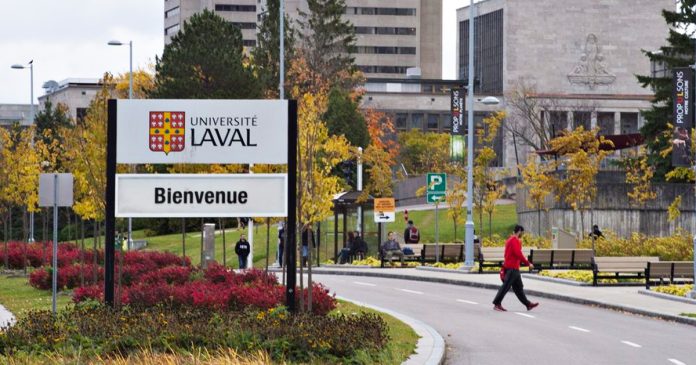 A job posting at Quebec City’s Laval University closed to able-bodied white men has been denounced by politicians across the political spectrum.

According to the Canadian Press, the controversial job post for a Canada Research Chair in the university’s biology department was put out back in September.

Laval University stated that it had “defined its equity, diversity and inclusion action plan to increase the representation of women, Indigenous people, persons with disabilities and visible minorities in the positions of Canada Research Chair (CRC) holders.”

It added that “in order to meet these commitments, only candidates with the required qualifications AND having self-identified as a member of at least one of these four under-represented groups will be selected in this process.”

The university claimed it “can’t accept other types of candidate profiles while representation targets are not met, in accordance with the CRC program.”

Despite having been issued months ago, the posting only received attention recently, after comedian Guy Nantel shared it on social media on Mar. 28.

On Twitter, Nantel asked the university leaders, “when a young, non-disabled white male applies to study with you, do you advise him in advance that he will be excluded from various benefits because of his appearance, regardless of his qualifications?”

The discriminatory job posting has since received backlash from political figures of different levels of government and most political parties.

“Encouraging the hiring or awarding of research funds for under-represented groups with equal qualifications, yes, but explicitly excluding competent people because they’re not part of a visible minority or they’re men is overblown for the Quebec government.” added Guilbault.

Anglade said that “excluding candidates, I don’t think it’s the right approach,” while Plamondon said that the posting was “completely unacceptable.”

“We hire certain candidates, with a certain profile, to be evaluated on the merits of their competencies,” added Plamondon.

However he added that there “are more progressive ways” to meet these targets.

Liberal MPs include Anthony Housefather and Joel Lightbound. Lightbound made headlines earlier this year after he called out Trudeau’s COVID-19 policies amid historic Freedom Convoy demonstrations.

Housefather said that “excluding people like that is going too far, maybe.” while Lightbound stated that while he believes inclusion should be favoured, the priority should be merit.

When asked about the conditions of research chair positions, Prime Minister Justin Trudeau said that he “thinks that it is important to have a scientific community that is a reflection of Canada, of Quebecers.”

True North reached out to Conservative leader Candice Bergen for her thoughts on the controversy.

Bergen’s office provided a statement from Quebec Conservative MP Pierre Paul-Hus that states, “we believe that nobody should be excluded from research chair positions because of who they are.”

PPC leader Maxime Bernier also spoke with True North on the matter, saying “this controversy at Laval University is just the tip of the iceberg of the many federal programs that divide Canadians on the basis of race, gender and other characteristics.”

The controversy at Laval University can be attributed to the Canada Research Chair program, which uses a quota system to enforce diversity. According to the National Post, Universities that do not meet the program’s diversity quotas laid out for each “identity category” by 2029 risk being stripped of funding for positions.

The Bloc Quebecois (BQ) sought unanimous consent in the House of Commons on Apr. 6, calling for the recognition “that inclusion and diversity must be encouraged within our institutions; that exclusion is not a method of inclusion; and that this House call on the government to revise the federal criteria for research chairs to prevent exclusion in job postings.”

The motion was denied unanimous consent, with opposition coming from Liberal and NDP MPs.

This is not the first time that a Canadian university has been accused of discrimination against white people.

In 2018, Dalhousie University in Halifax received criticism after it restricted its opening for a  senior position to “racially visible” candidates, meaning that white people would not be considered.

It should be noted that able-bodied white men are still able to apply to Laval University’s Canada Research Chair – their application would not be considered, however.