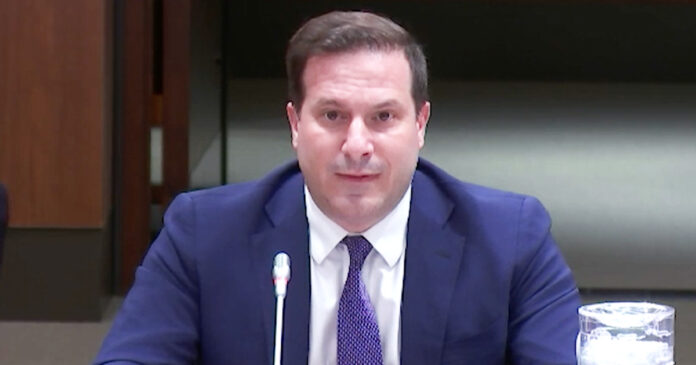 Public Safety Minister Marco Mendicino repeated disproven claims about the Freedom Convoy to justify the Trudeau government’s use of the Emergencies Act to crack down on the peaceful protest in Ottawa.

Mendicino and Attorney General David Lametti appeared before the Special Joint Committee on the Declaration of Emergency on Tuesday to defend the government’s use of the never-before-used act.

While answering a question about why the government decided to resort to such extreme measures, Mendicino falsely claimed convoy protesters posed a threat to Ottawa residents and were connected to the highly-publicized arson attempt in a downtown apartment building.

“People who live in apartment buildings find that their front doors are locked and that fires are set in the hallways and corridors,” Mendicino said before Conservative MP Glen Motz interrupted on a point of order and corrected the Liberal minister.

Ottawa Police Service (OPS) has cleared the Freedom Convoy of any involvement in the arson attempt, arresting one suspect in March and another in April.

According to a Mar. 21 OPS press release, a 21-year-old man named Connor Russell McDonald was first charged for his involvement.

“A man has been charged in relation to a deliberately set fire in an apartment building on Lisgar Street on February 6, 2022. A second man is still wanted by police,” OPS wrote. “There is no information indicating MCDONALD was involved in any way with the Convoy protest which was going on when this arson took place.”

On Apr. 6, the OPS issued a statement on a second man arrested for the arson attempt, revealing that 41-year-old Bartosz Wernick had nothing to do with the Freedom Convoy protests either.

Mendicino also repeated the false claim that the border blockades in Alberta and Ontario had had a “devastating” economic impact on international trade.

“The impacts were devastating. The daily cost to the economy at each of these ports of entry were astronomical,” the minister said in committee.

However, according to Statistics Canada, data shows that border blockades that happened while convoy protests took place in Ottawa had little effect on cross-border trade.

The government’s data revealed that international trade at Ontario and Alberta borders with the US were actually up in February compared to the same time last year.

During the committee, Lametti confirmed that the government referred to false reports from the state broadcaster to justify freezing the bank accounts of protesters.

“There were reports. CBC reported … that there was foreign funding through a variety of different sites. The various pieces of information that we had explain the various measures that we took,” Lametti said in response to a question from Senator Gwen Boniface.

CBC has parrotted the idea that extremists and foreign sources were behind the trucker protests despite evidence showing otherwise.

In March, the CBC publicly retracted a news story about the convoy that erroneously claimed that support for the protests had largely come from foreigners.

However, according to GoFundMe executives who testified before a March 3 Commons public safety committee, foreigners made up a very small portion of the donors.

“Our records show 88% of donated funds originated in Canada and 86% of donors were from Canada,” said GoFundMe president Juan Benitez.

Throughout the protests, the Liberals and legacy media made a number of claims about the convoy ranging from extremist involvement, foreign funding and millionaires bankrolling the movement. To date, all of these claims have been called into question by law enforcement officials and fundraising executives.