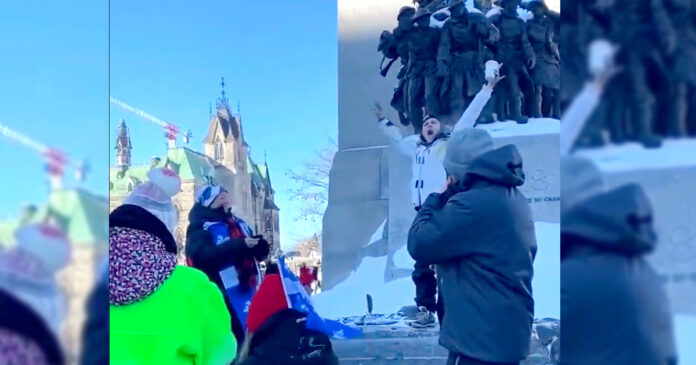 Yet another allegation against the Freedom Convoy was debunked this week as Ottawa police announced they had identified the woman who stood atop the Tomb of the Unknown Soldier in January, saying she was not associated with the convoy truckers.

The Ottawa Police Service (OPS) said on Thursday that it had dismissed a case against a Quebec woman who was filmed at the National War Memorial on Jan. 29, the first Saturday of the convoy protests. The woman, whose name has not been released, was standing atop the Tomb of the Unknown soldier, yelling “freedom.”

As reported by Blacklock’s Reporter, the OPS said in a statement that the woman was “spoken to, showed remorse for her actions and police are confident she will not re-offend.”

“There was no admitted association to the Freedom Convoy truckers,” said OPS spokesperson Carole Macpherson.

The incident was one of many during the Freedom Convoy that legacy media outlets and politicians blamed on the truckers and freedom protesters before any investigation had been conducted.

Prime Minister Justin Trudeau alluded to the incident in his first public statement about the convoy on Jan. 31, referring to it as a “desecration.”

“I know you’re wondering about what you saw in our capital this weekend,” Trudeau read from a prepared statement. “Freedom of expression, assembly and association are cornerstones of democracy, but Nazi symbolism, racist imagery, and desecration of war memorials are not.”

Another MP who spoke out about the incident at the war memorial was Liberal veterans affairs minister Lawrence MacAuley at a committee meeting on Feb. 1.

“Everyone has a right to protest in this country, but this disrespect shown to the National War Memorial, the Tomb of the Unknown Soldier and the National Aboriginal Veterans Monument was completely disgusting,” MacAulay told a veterans affairs committee.

“To see that from the protesters was shocking, disgusting and a slap in the face to every Canadian veteran. I hope we never, ever see anything like that again in this country.”

An investigation into the incident was sponsored by Liberal MPs on the committee, although the investigation was handed over to police on Mar. 9.

The announcement by the OPS is the latest of many to disprove accusations made towards the Freedom Convoy truckers and the freedom movement. Earlier this month, Ottawa police arrested a second suspect in a highly publicized arson attempt at a downtown apartment building, revealing that neither man had been attached to the convoy – as Liberal public safety minister Marco Mendicino has continued to allege.

Despite the OPS statement exonerating truckers from the incident at the war memorial, some legacy media outlets continued to refer to the Freedom Convoy when reporting it on Friday.

For example, CTV’s original headline – “Freedom Convoy: Woman who stood at War Memorial not charged” – appeared to have been changed to remove “Freedom Convoy.” The story does not, however, make any mention of police statements excusing the truckers. Meanwhile, the Ottawa Citizen reported the story as “No charges for convoy Tomb dancer, police say.”

In the days after the incident, freedom protesters – some of whom were veterans – took care to watch over the National War Memorial, placing flowers and sweeping away snow. Fences were soon installed around the site, but veterans and other protesters removed them on Feb. 12 – two days before Trudeau invoked the Emergencies Act to end the convoy demonstrations.