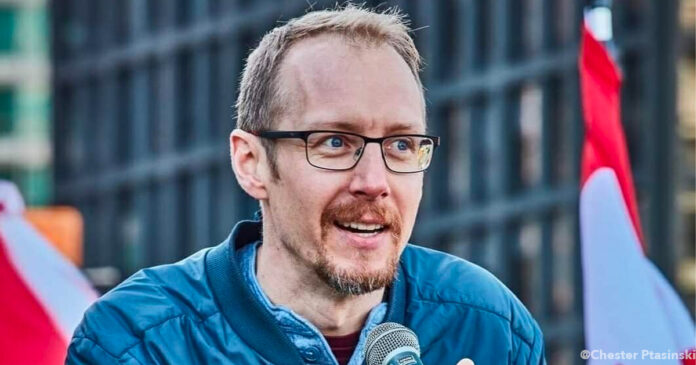 A British Columbia dentist who made headlines for challenging Dr. Bonnie Henry’s newest vaccine mandate is refusing to comply, telling True North, “I have no intention of letting these authoritarians pied-piper us into global communism because I have three children, and this is the hill I’m willing to die on…because I don’t see any hills after this.”

Robert Johnson of Salmon Arm, B.C also announced that he intends to run in the next provincial election, saying that the way the government has handled the Covid pandemic shows that things need to be turned around.

“It’s pretty clear that everything the government has done for the last two years has done more harm than good,” he said. “Like I said in the video, they’re either evil or incompetent, so I think we should stop listening to them.”

“There’s an opioid epidemic, a cancer epidemic, an obesity epidemic, a heart disease epidemic, a diabetes epidemic, etc. – why do we only care about covid? And why do we not care about prevention or early treatment options? Why is there only one option for addressing this problem? These are really basic questions that lots of us have been asking for two years.”

Johnson posted a video in March after the province declared it was extending its Covid vaccine mandate to include private-sector healthcare professionals, including dentists, nurses, midwives, opticians, chiropractors and many others.

In the video, Johnson challenges the bases for Henry’s health orders, especially as other countries opened up and new research showed the Covid vaccines didn’t work as promised.

“There’s a point at which ignorance becomes malice, where it’s simply not possible to be that ignorant except intentionally and maliciously,” Johnson said.

“So, when I look at Bonnie Henry’s mandates as far as I’m concerned there is no scientific, logical, legal, ethical or moral basis for any of them. So, in my mind, that only leaves evil and incompetence, and I don’t honestly know which would be worse, but like I just said, it’s indistinguishable at this point.”

Although the government appears to have backed off of making Covid shots a requirement to practice in B.C., Henry still required these professionals to disclose their vaccination status to their regulatory colleges by April. She gave a press conference on Tuesday to publish the sector’s collected vaccination rates.

Johnson has said all along that he would not reveal his vaccination status, adding that the B.C. Dental Association should Henry “to crawl back into whichever hole she came out of.” He is also a member of Healthcare Workers United, a group of healthcare professionals including doctors and nurses who oppose vaccine mandates.

“Fortunately, it hasn’t affected my career…yet…other than having to deal with the stress of the constant threats,” he told True North. “I have several friends who are nurses and the way they have been treated is one of the most disgusting, ridiculous things I’ve ever seen.”

“I’ve obviously had issues with being excluded from society – not being able to take my kids to the pool almost pushed me over the edge. I still can’t understand why anyone was ever ok with this. This never even should’ve been a discussion.”

As a healthcare professional, Johnson said he is speaking out against the government’s health orders because he “understood from the beginning that this has absolutely nothing to do with health and safety, and it’s been so painful to watch the manipulation that has gone on in the media for the last two years.”

“Privacy and autonomy are literally the two most basic, sacred, core principles of medicine and Bonnie Henry clearly doesn’t care about either,” he said. “I never, ever, refer to her as Dr. Bonnie Henry – because doctors take an oath that she has blatantly, and repeatedly, violated.”

“The other issue is the fact that no one really knows what she intends to do with this information that she is collecting with this massive privacy breach. Some of the language in that order is very concerning. She basically has declared unvaxxed people to be a health hazard, and given herself the ability to declare something an ‘emergency’ whenever she sees fit, and given herself virtually unlimited powers to deal with these ‘emergencies.’”

“I think the only emergency in this province is the fact that 5 million people have been tyrannized by one deranged lunatic for 2 years.”

“The propaganda machine is so powerful I don’t know how we fight back,” he said. “That’s why I appreciate all of you in the independent media so much, I really feel like you’re the only hope we’ve got.”

“I appreciate you providing a platform for those of us trying to push back against the government’s ridiculous narrative. I hope there is some way to hold the government and mainstream media accountable, and I hope we can repair the fabric of society somehow.”

“I really feel like this is a cultural and spiritual battle and we need to work to correct that at the grassroots.”