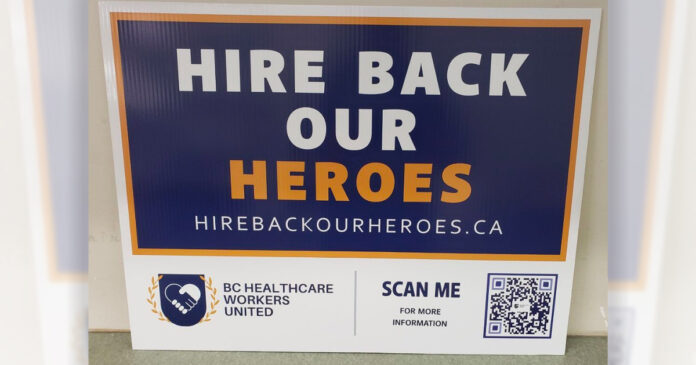 A new campaign by a group of British Columbia healthcare professionals is urging the government to start fixing the province’s broken healthcare system by hiring back the heroes it praised so highly in the early days of the pandemic.

“Our healthcare system in B.C. is crumbling,” said BC Healthcare Workers United (BCHWU) spokesperson Laura Milaire. “Wait times are getting longer and longer, clinic after clinic is closing, and 900,000 B.C. residents are currently without a family doctor. Yet our government officials will not bend.”

BCHWU is a grassroots organization representing B.C.’s 18 regulated private-sector healthcare professionals, all of whom fell under provincial health officer Dr. Bonnie Henry’s latest vaccine mandate in March. They include dentists, doctors, nurses, midwives, chiropractors, psychologists and many others. The group is also affiliated with several others including BC Nurses Fight Mandates and the BCPS Employees for Freedom.

The organization has produced a new video that includes testimonials from three of the approximately 2,582 employees in public healthcare settings that have been fired over vaccine mandates. These firings include 927 employees from the Interior Health region, 474 from Fraser Health, 393 from Island Health and 304 from Northern Health.

To address crippling staffing shortages, the B.C. government recently announced it would spend $12 million to fast-track the registration and licensing process for foreign-trained nurses. This funding includes $9 million in bursaries to help around 1600 foreign-trained nurses with the costs of assessment fees.

Speaking to True North, the BCHWU said the province’s healthcare was already in crisis before the pandemic made it worse. They added that Premier John Horgan and Health Minister Adrian Dix could begin to fill the cracks by recognizing what the province already has.

“At a time when we are crippled with debt and inflation is at its highest, why would we spend more money to bring in workers when we have perfectly healthy and experienced workers right here?”

Connie, Christine and Angel all say they’re more than eager to get back to their callings.

Connie is a mother of two and former acute-care nurse who says she is now working in construction after being fired over vaccine mandates. She described the situation with B.C. healthcare as dire.

“Nurses are talking about walking out,” she said. “They’re talking about leaving; they’re retiring. We’re in the worst situation that has ever happened – ever – in healthcare. Yet our province is refusing to hire back our healthcare workers. I am willing, I am able. I’m educated. I have experience. But I’m being refused to return to nursing.”

Angel, another nurse fired over vaccine mandates, said that it doesn’t make sense that she and her colleagues are being discarded.

“The rest of us that are not vaccinated and can’t work are working random jobs,” she said. “I personally am working at a tree farm, and I’ve got nurse friends that are working in factories and sawmills. We’re perfectly healthy, we’re strong, we’re fine to work and we can’t work in healthcare. It just doesn’t make sense.”

Christine Wiebe, an imaging technician, said she is struggling to learn who she is again after losing her job of 28 years.

“Now that the government is trying to hire people from out of the country to replace us, it’s so saddening,” she said. “So I’m sitting at home, looking after my family. It’s wonderful. But I would love to serve the public again.”

While B.C. appears to have backed off of its latest mandate – demanding instead that the regulatory colleges collect the vaccination data of its members – thousands of healthcare workers have already been terminated, including nurses affected by a previous health order.

Echoing the headline-making sentiments of one of its members – dentist Robert Johnson – the BCHWU told True North that the vaccine mandates no longer make sense.

“There is ample data now to show that there is no difference in transmission between vaccinated and unvaccinated, yet the unvaccinated can’t work?  And this far into the pandemic we know that most of the population has been exposed, so why will natural immunity not be recognized?”

The organization added that while many of its members are still working and that those who were terminated would be happy to come back, the government’s response to the pandemic has sown anxiety and dread.

“The stigma, division, and shame that has been cast onto this subset of the population is something I never thought I would see in Canada.  Most of us are still working. I feel our pushback and efforts have been successful. However, there have been negative workplace situations that have made working through this very difficult.”

“The constant cloud hanging over you and the threat of something coming makes going to work something you dread.”

The Hire Back our Heroes campaign website can be visited here, where people can donate to the BCHWU and order lawn signs showing their support.