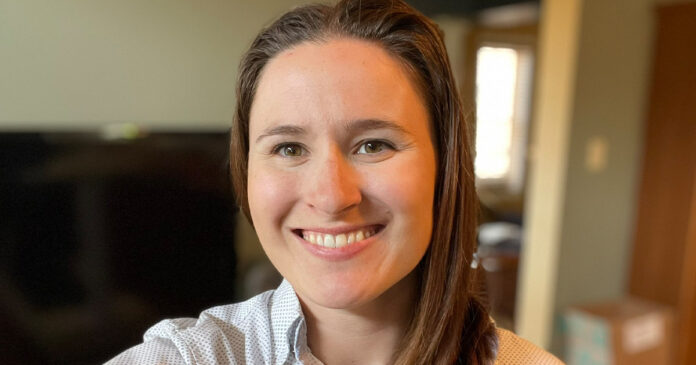 All 29-year-old teacher Chanel Pfahl did was make a comment on a private Facebook feed that kids should not be indoctrinated about Critical Race Theory (CRT).

She suggested instead that teachers should focus on “modelling kindness” and speak out against “any form of discrimination.”

She also shared a YouTube video of a speech given by the black UK minister of equalities Kemi Badenoch, in which she outlines her government’s decision not to teach CRT.

That was in February 2021 and Pfahl – who taught for a French Catholic school board in Barrie – was subjected to backlash within 10 minutes of posting her thoughts. She was investigated and put on leave for a week without pay.

She was ordered not to communicate with parents.

“It was like I was a criminal,” she said.

Fast forward to March 2022 when the science, French and English teacher learned she was being investigated by the Ontario College of Teachers (OCT) for the same comments.

After only four years, Pfahl is now taking a break from teaching to deal with some serious health issues and awaiting her OCT hearing.

In April, she posted a very insightful story on Substack — a new website for writers of all political stripes. In her piece, Pfahl writes about her tumultuous experience and her decision to not back down in her opposition to CRT.

“I am not exactly thrilled about being ostracized for voicing my dissenting opinions, losing so-called friends, and potentially even sacrificing the career I love. But the reality is that we each have a decision to make regarding our own participation and complicity in allowing this tragic drift away from our once free country,” she writes.

In recent months, she’s applied for some supply teaching jobs but despite the great need for supply teachers, she’s never heard back.

“I feel like I’ve been canceled,” she told True North recently.

Pfahl’s situation is yet another example of the shameless efforts to cancel educators and school board administrators who dare speak out against the dangerous infiltration of the woke agenda in Ontario’s school system.

She’s been sidelined – just as 20-year Waterloo Region District School Board (WRDSB) teacher Carolyn Burjoski was in January – for saying what is on the minds of the silent majority.

Burjoski was cancelled four minutes into her presentation to the Waterloo public school trustees about highly sexualized books in elementary school libraries, sent home and labelled “transphobic” by the board chairman, Scott Piatkowski.

Burjoski has slapped Piatkowski and the Waterloo school board with a $1.7-million defamation suit.

Earlier this week, the woke trustees on the WRDSB – led by Piatkowski – were at it again.

The board’s only black trustee, Mike Ramsay, faced a lynch mob following a code of conduct complaint for allegedly tweeting my stories and those of other conservative writers.

Removed from most board meetings until the end of the current term (Sept. 30), the report on Ramsay was kept secret and he was not permitted to speak in his own defence at a special board meeting.

Trustee Linda Stone quit the Durham District School Board a few weeks ago after being harassed for months for daring to question the board’s proposed Human Rights policy — specifically their curiously open-ended definition of white supremacy.

At the Ottawa-Carleton District School Board, woke trustees, including the radical trans trustee Lyra Evans, have been gunning for their colleague Donna Blackburn for some time now.

Blackburn recently tried to move a motion asking for board officials to work better with the Ottawa police to deal with the uptick in school violence. She was mocked, bullied and called “racist.”

It remains to be seen who’ll be next on the woke firing line for simply echoing the concerns of the silent majority.

Meanwhile Pfahl continues to have an active presence on Twitter – insisting that she doesn’t say anything controversial.

“I just really feel people should stop being scared to say what’s right,”  she said.

“Nothing I have said has been discriminatory or hateful.”