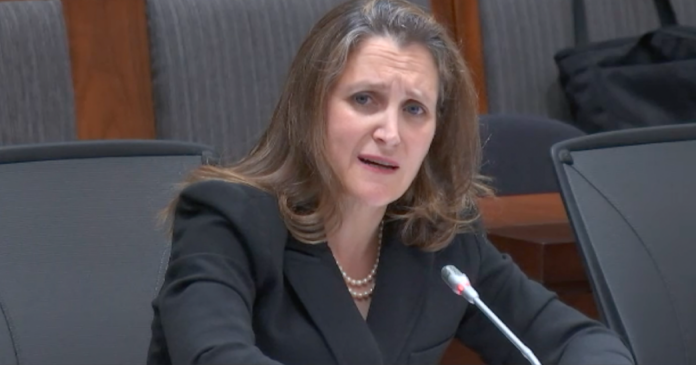 Conservative MP Larry Brock grilled Deputy Prime Minister Chrystia Freeland on Tuesday for relying on a fake CBC story that claimed a majority of the funding to the Freedom Convoy came from foreign sources.

During the Special Joint Committee on the Declaration of Emergency, Freeland repeatedly refused to answer questions regarding what information the Liberals relied on to justify using the extraordinary powers to quash demonstrations in Ottawa.

“We’re you informed that the CBC retracted a false story about foreign funding donations to the convoy?” asked Brock.

“Mr. Brock I don’t believe the CBC is being interrogated here…” responded Freeland.

“Just answer the question, Minister Freeland. Were you aware, yes or no?” said Brock.

“I don’t have the article before me and I’m not here to answer questions about the CBC,” said Freeland.

“You as the most senior cabinet minister and the deputy prime minister relied upon that initial story from the CBC and shared your concerns with Canadians regarding terrorism funding and money laundering. Your words, correct?” said Brock.

“Let me be very clear. My principal concern when it comes to the illegal occupation and illegal blockades is the economic harm that was done to Canada,” replied Freeland.

Several stories about the convoy were quietly retracted by the state broadcaster. In one instance, soon after a story was altered, the CBC addressed the retraction on its program The World This Hour.

“On February 10 in a report about the protest convoy CBC Radio’s The World This Hour incorrectly said GoFundMe ended a fundraiser for the protesters over questionable donations to the group,” said a spokesperson.

In a 14-page document tabled to the House of Commons in February, the Liberals directly cited CBC News’ analysis of donor data that claimed a majority of funding for the convoy came from abroad, despite later testimonies by funding platforms disputing these claims.

During the convoy, Freeland employed Canadian money laundering and terrorist financing tools to freeze the accounts of convoy participants. After the Emergencies Act was revoked, officials with the Financial Transactions and Reports Analysis Centre of Canada debunked claims that the convoy was funded by terrorist organizations.

According to Blacklock’s Reporter, Freeland was also unable to cite any specific economic damage that Canada faced as a result of the convoy during Tuesday’s committee.

“You are the Minister of Finance,” said Senator Claude Carignan. “Do you have the figures when it comes to giving us data on the economic impact of the blockade?”

“I have many figures in my head. It was clear there were damages every day,” said Freeland.