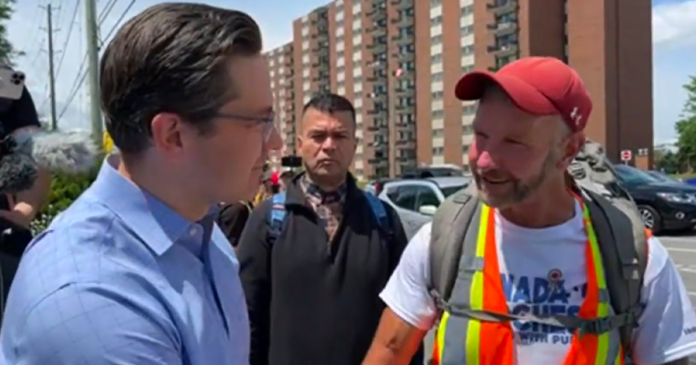 Poilievre met with the 28-year-long veteran prior to his arrival at the Tomb of the Unknown Soldier.

“I support freedom of choice; I always have and believe people should have the ability to decide for themselves on these matters. We should be free Canadians that can decide what we put in our bodies, decide what we think, decide who we are as people and restore the freedom that brought so many millions of immigrants to this country in the first place,” said Poilievre during the meeting.

“I think that he is advocating freedom of choice. People should have the freedom to make their own decisions with their own bodies and that’s why, I think, he’s walked across the country and that’s why I thought I would give him a greeting and give him a hearing and see if he has any thoughts to share with me.”

Topp began his journey in front of the Terry Fox monument at BC Place in Vancouver after being investigated by the CAF for refusing to comply with Covid-19 vaccination orders.

“Everywhere I meet people, I hear their stories and the stories are amounting to an overwhelming amount of individuals suffering due to government overreach,” Topp told True North in March.

“I am marching to carry these stories to Ottawa. I want to thank every person who has entrusted me with their story. It increases my resolve more and more each day.”

The Conservative MP was not the only politician to meet with Topp and join him on his 4,293 km march. Last week, Topp met with over a dozen Conservative MPs including leadership candidate Leslyn Lewis, Cheryl Gallant, Jeremy Patzer and others.

“I thank you from the bottom of my heart for responding to this invitation and taking time out of your busy schedules to attend this meeting,” said Topp at the meeting.

“We must respect choice of all Canadians, including CAF personnel. James is marching from Vancouver to Ottawa to support Canadians hurt by mandates,” tweeted Baber.