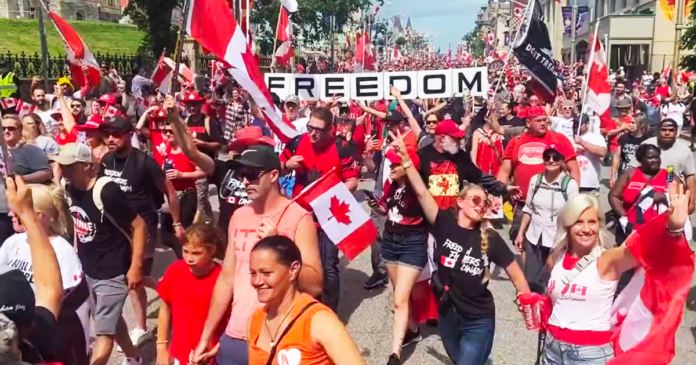 Despite law enforcement in Ottawa enforcing a series of additional security measures, thousands of Canadians took part in freedom celebrations for Canada Day.

Organizers had initially planned a full day of freedom events in the nation’s capital, including on the lawn of the Supreme Court and on Parliament Hill.

However, the City of Ottawa announced that police would be restricting access to downtown on Canada Day and the federal government installed fencing at both the Supreme Court and Parliament.

Further, people wanting to access Parliament Hill on Canada Day were subjected to a security checkpoint. A long list of items were prohibited, including certain signs and banners.

Despite the additional security measures, freedom events took place across the nation’s capital.

The People’s Party of Canada (PPC) held a gathering in Ottawa’s Strathcona Park at noon, PPC leader Maxime Bernier and other party figures were present.

A freedom march began around 3:30p.m. ET, with a large group taking to the streets of Ottawa. Participants could be heard chanting “free Tamara Lich” and “Trudeau’s gotta go”.

On the days leading to Canada Day, Ottawa mayor Jim Watson warned there would be zero tolerance for unlawful activity and Ottawa By-law said they would hand out $1000 fines for certain behaviours, including shouting.

Authorities kept their word and cracked down on freedom participants on several occasions throughout the day.

In one instance, Ottawa By-law shut down a table in front of Parliament where people were giving out anti-Trudeau badges. A man also claimed he was fined for painting “Free Tamara” on Wellington Street.

Law enforcement also cracked down on The Democracy Fund (DMF), a non-profit dedicated to defending civil liberties. The DMF said By-law threatened their lawyers with a heavy fine for displaying a banner.

According to Ottawa By-law, 327 parking tickets were issued, 91 vehicles were towed and 3 fines were issued for “unauthorized use of fireworks” since Jun. 29.

In addition to the freedom events, the government’s official Canada Day celebrations also took place, which included a speech from Prime Minister Justin Trudeau, music and a firework show.

Due to ongoing construction, the government’s celebrations took place at Lebreton Flats this year rather than on Parliament Hill.