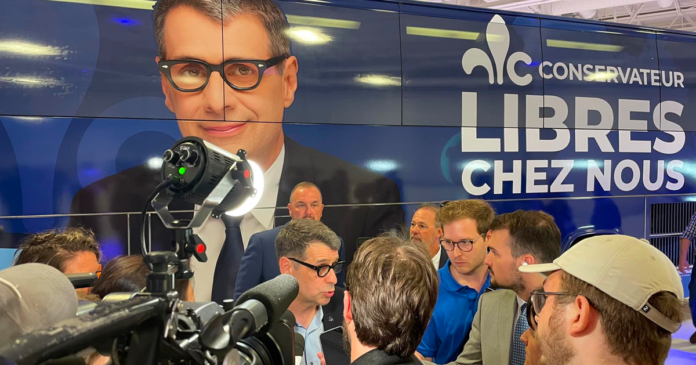 The Conservative Party of Quebec (PCQ) launched its campaign in Quebec City Sunday ahead of October’s provincial election.

Supporters gathered at the Complexe Capitale Hélicoptère to cheer on PCQ leader Eric Duhaime as he gave a campaign launch speech. Duhaime was introduced by actress and PCQ candidate Anne Casabonne.

In his speech, Duhaime said the province’s politics are at a turning point, and that the PCQ represents a bold change that will give people more freedom.

“We are at a major turning point in Quebec politics, we are the change. It is time to think big, to do things differently. It’s time to finally be ‘Free in our own homes,’” Duhaime said referencing the party’s slogan for the election.

The PCQ had previously released a freedom-oriented platform on August 14 titled,  “Liberty 22.” The PCQ is pledging reforms on the economy, housing, health care, transportation, the environment, child care and education.

In his speech, Duhaime said that the PCQ has “extracted from our program the proposals that most closely reflect the reality of Quebecers.”

“We propose to Quebecers to be freer in their choices. Achieving all this in a first mandate will be extraordinary.”

The PCQ has seen incredible growth over the past two years, from receiving only 1.46% of votes in the 2018 provincial election to polling as high as 24% in recent polls.

The party has also gone from 500 to over 60,000 members and has nominated more candidates than the Quebec Liberals and Parti Quebecois.

Duhaime is also the first PCQ leader to be invited to televised leaders’ debates.

“We have come a long way together in the last year and a half!” said Duhaime. “Remember where we started from: at the beginning of 2021, we had 500 members… and almost nobody in Quebec knew we existed.”

The PCQ’s rise in popularity can be attributed to Duhaime’s strong opposition to the province’s lockdowns, mandates and restrictions, which were among the strictest in the western world.

Duhaime said in his speech that he decided to get into politics the day the government announced they would be masking children in schools.

“I agreed with the Pediatricians who said (masking children) didn’t make any damn sense,” he said.

He also accused Premier Francois Legault of neglecting children because they are not voters – and promised to not do the same.

“The children of Quebec may not have the right to vote, but (Conservatives) won’t abandon them.”

The party also unveiled their campaign bus at the rally. Duhaime had previously been touring the province in a black Ford Explorer SUV that displayed the party’s slogan.

The Quebec election is scheduled for October 3, with the official campaign period expected to start in the coming weeks.