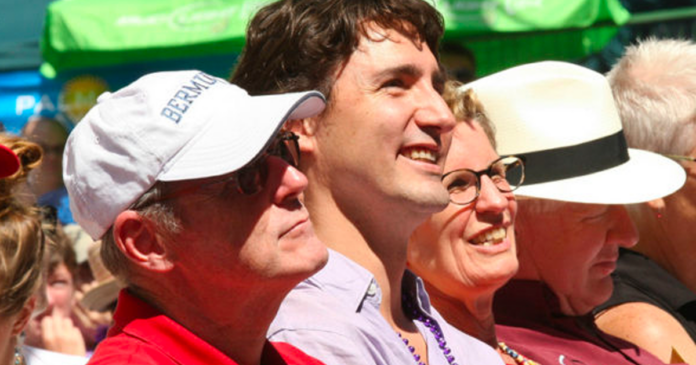 Prime Minister Justin Trudeau has a long record of hobnobbing with individuals who have been convicted or accused of committing heinous crimes such as possessing child pornography or even attempted murder.

Renewed spotlight on a campaign interaction between Conservative leadership frontrunner Pierre Poilievre and a far-right podcaster has some asking why the legacy media has not scrutinized Trudeau’s own past to the same degree.

True North has compiled a list of the most heinous individuals Trudeau has chosen to associate with over the years.

Levin, who helped craft Ontario’s sex-ed curriculum, was sentenced in May 2015 to three years in prison after pleading guilty to possession of child pornography, making child pornography and counselling to commit sexual crimes.

As reported by True North in March, Trudeau and deputy prime minister Chrystia Freeland met with the cofounder of a far-right fascist party in Ukraine based on Hitler’s Nazi Party.

Parubiy met with Trudeau on several occasions between 2016 and 2019 while he served as the legislative speaker of the Ukrainian parliament. In 1991 Parubiy co-founded the “racial nationalist” Social-National Party of Ukraine.

The very same year former Calgary politician Terry Lo lured and sexually assaulted a teenage girl, he was photographed with Trudeau at the 2016 Calgary Stampede.

Lo was arrested after the teenager filed a complaint causing the RCMP to initiate a sting operation.

In 2016, Trudeau awarded aid worker Peter Dalglish with the Order of Canada but nearly two years later, Dalglish was charged with sexually asssaulting two children by authorities in Nepal.

Dalglish was arrested by the Central Investigation Bureau of the Nepal Police for sexually assaulting two boys aged 11 and 14. He was sentenced to serve 8 years in prison for the crimes.

Trudeau has had several meetings with antisemitic extremist Amin El-Maoued who has been characterized by B’nai Brith as a “radical activist who has incited violence against Jews.”

El-Maoued even got a certificate of appreciation in 2018 signed by Trudeau and handed to him by Liberal MP Iqra Khalid.

During Trudeau’s disastrous trip to India in 2018, his diplomatic team invited convicted terrorist and attempted assassin Jaspal Atwal to a state dinner with representatives of the Indian government.

Atwal was convicted in 1986 after attempting to murder an Indian state cabinet minister while visiting Vancouver Island. He was also arrested in 2020 for issuing death threats to a local radio host.

Upon his return to Canada, his former wife Caitlan Coleman accused him of sexually assaulting her.  A judge dismissed charges against Boyle in 2019 after finding neither his or his ex-wife’s testimonies reliable.