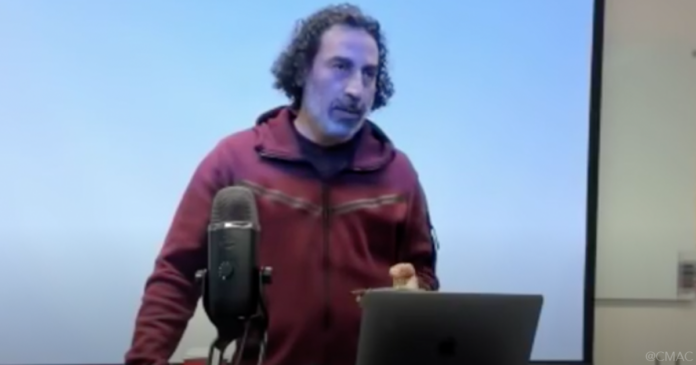 The University of British Columbia (UBC) is struggling to explain how a disgraced antisemitic instructor, who received a $134,000 federal contract, was invited to speak on one of its campuses for a May 14 lecture.

During his Canada-wide and federally-funded “Building an Anti-Racism Strategy for Canadian Broadcasting” tour, Laith Marouf gave a speech at UBC’s West Mall Annex.

Marouf directly cited the School of Community and Regional Planning (SCARP) for sponsoring his talk.

A UBC spokesperson now claims that SCARP did not sponsor Marouf’s event “in any way.”

“The event was not an official SCARP event, nor was it sponsored in any way by SCARP. Centrally booked events are assessed for safety and security, as well as hate speech,” said UBC spokesperson Matthew Ramsay.

“A faculty member facilitated an enquiry from someone outside of UBC in locating a space for an event, without knowledge of the abhorrent views that have been expressed by one of its speakers.”

During the event Marouf spoke about how “colonialism and racism governs the media that we consume here in Canada.”

Marouf went on to criticize legacy media outlets like the CBC, CTV and Globe and Mail over their coverage of an Al Jazeera reporter’s death in the West Bank refering to Israel as “the Zionist apartheid regime.”

“This disgraceful media coverage is an example of racism in Canada’s broadcasting and we can see how media upholds white supremacy, genocide and colonialism from Turtle Island to Palestine,” said Marouf.

“But media are also useful tools for identifying the weak points in the system and dismantling it. So I invite you to join me in one-minute silence to honour journalists and martyr Shireen Abu Akleh. Free Palestine.”

The university did not elaborate on which faculty member was behind the invitation or whether there’s an investigation into the matter.

Earlier this week, Minister of Housing and Diversity Ahmed Hussen announced that he would cut funding to Marouf and his organization the Community Media Advocacy Centre (CMAC) after Marouf’s antisemitic tweets resurfaced.

Liberal MP Anthony Housefather has accused Hussen of knowing about Marouf’s antisemitic views before the issue was widely reported on.

In an interview with the National Post, Housefather claims that he warned Hussen about Marouf’s antisemitic remarks, told the minister to cut the organization’s funding and hoped the government would’ve cut CMAC’s funding “the moment anybody became aware of this.”

The Conservatives believe the Trudeau government’s reaction is not enough.

“More questions than answers for those subjected to the vile & known hatred of Laith Marouf,” tweeted Conservative MP Melissa Lantsman.

“Again and again, no accountability. Rather than demanding who at Canadian Heritage

approved the (funding), the Minister demands who at CMAC hired Marouf. This isn’t a serious response.”