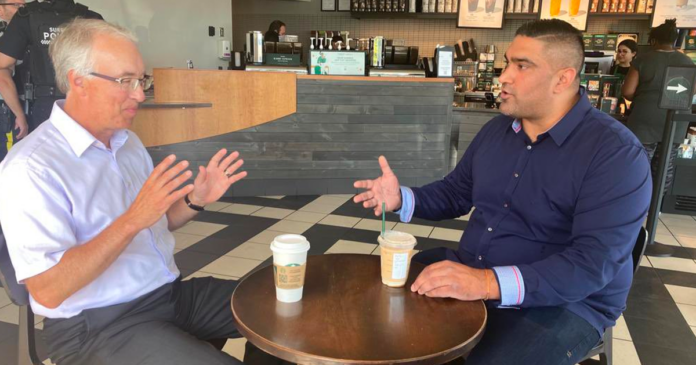 The endorsement comes only a week after Rustad was booted from the BC Liberal Party by leader Kevin Falcon for questioning the climate change narrative.

Rustad shared photos of himself and the South Surrey candidate together in the riding.

“Great to chat with Harman Bhangu. Harman is running for MLA in South Surrey. He’s committed to fighting environmental elitist policies which punish working people. I made a donation to him – and if you want to fight environmental elitism you should too,” tweeted Rustad.

In a statement emailed to True North, Rustad said while he plans on continuing to serve as an Independent MLA for his riding, he “will be exploring all options” but he has not spoken with the leader of the Conservatives.

“I met with Harman on Tuesday. We spent some time together discussing a variety of topics, the riding of Surrey South and why he has entered the race. I found him to be genuine, caring with a desire to represent all of the voices of the riding. He shares my concern about environmental elitist policies that are hurting people,” Rustad told True North.

Bhangu, who is a first-generation Canadian and a heavy-load trucker, announced his candidacy during a weekend campaign launch. At the event he was introduced by political commentator Aaron Gunn who had his candidacy for the BC Liberals leadership cancelled by the party last year.

“John is an incredibly principled MLA and I couldn’t be more thankful to have his endorsement. We need brave MLAs who are willing to stand up for taxpayers, scrap the carbon tax, call out the failing healthcare system, and defend free speech. I am proud to be running for a party that encourages dialogue instead of silencing others,“ Bhangu told True North.

Rustad was kicked out of the BC Liberals caucus after he retweeted Greenpeace co-founder Patrick Moore who questioned whether CO2 drives global temperature changes.

“Following a pattern of behaviour that was not supportive of our caucus team and the principles of mutual respect and trust, I have removed MLA John Rustad from the BC Liberal Caucus effective immediately,” said Falcon in a statement on Rustad’s expulsion.

According to Rustad, current climate policies are having a negative impact on British Columbians by driving up the cost of living.

“These environmental elitist policies are impacting on all three of these driving up prices and lowering our standard of living,” Rustad told True North.

“About 50% of people in British Columbia are struggling to put food on the table and I find it unacceptable that policies are being implemented without a full debate and without publicly discussing the intended or unintended consequences.”

The Conservative Party of British Columbia has been active since 1903 but has not had an MLA representative in the BC Legislature since 1975. Its current leader is Trevor Bolin.

In recent months, the party has adopted a new logo and elected a new Board of Directors.