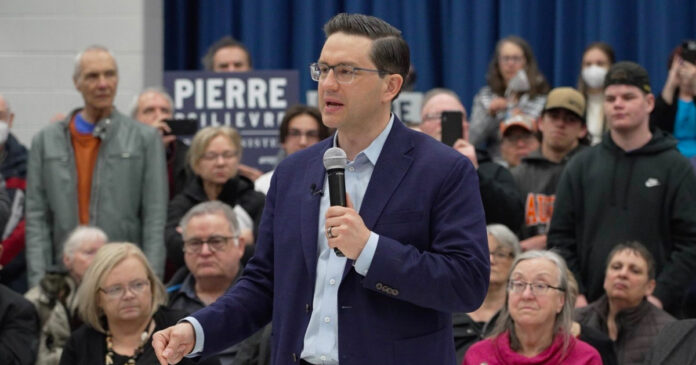 A proposal by Conservative leadership candidate Pierre Poilievre to ban indecipherable bureaucratic language from the government via a “Plain Language Act” has all the usual suspects riled up.

“Unfortunately, our governments do nothing but add and add and add paperwork and forms and endless bureaucratic red tape,” said Poilievre in a video announcing the policy.

“So we are going to simplify language. I’m going to pass the Plain Language Act that would require the following steps from the government.”

The law would require government employees to “use the simplest and fewest words possible” and would empower the Auditor General to review and remove overly complicated terminology or phrasing.

The suggestion is a curious one considering Orwell penned the 1946 essay titled Politics and the English Language in which the novelist decries the “pretentious diction” and “meaningless words” Poilievre wants to tackle.

National Post columnist Terence Corcoran also seemed to agree with Kheiriddin when tweeting, “Hold on. We do not need a new bureaucratic law to curb bureaucraticisms.”

In reality, these observations have a glaring omission: governments across Canada have in the past and are currently engaged in clarifying or changing laws and official diction.

Instead of simplifying language – which is in itself a neutral act – the federal government is currently engaged in sweeping language revisionism based on the political precepts of diversity, equity and inclusion.

The most recent example of this is Parks Canada’s ongoing plan to edit historical plaques it considers “colonialist and racist.”

Poilievre’s proposal is also not very far off from existing policies. An existing Treasury Board Government Communications Policy rings close to the Conservative leadership candidate’s own views.

“The obligation to inform the public includes the obligation to communicate effectively. Information about government policies, programs and services should be clear, objective and simple, and presented in a manner that is readily understandable,” the policy states.

“Messages should convey information relevant to public needs, use plain language and be expressed in a clear and consistent style.”

Here in my home province of British Columbia, the NDP government is also purging all “outdated-gender based” terms from its provincial regulations. Terms to be erased include pronouns like “he” and “she.” “Father”, “son” and “aunt” are also on the chopping block.

There’s a big difference between sticking to the principles of K.I.S.S (Keep It Simple Stupid) in order to increase accessibility, especially for immigrants, and forcing a left-wing political ideology onto people via diction.

Yet when those stories were reported, those now criticizing Poilievre had no qualms and raised no comparisons to some dystopian future. It raises the question, why would anybody take issue with making language more simple?

Of course, politics is the answer considering the Conservative Party of Canada leadership race is a little over a week away.

In my own way, however, I did my part and decided to send the Charest campaign a copy of Orwell’s essay with the hope that they too will speak more plainly about their intentions.